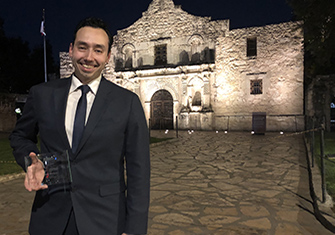 The Outstanding Campus Chapter Adviser Award, initiated in 1978, is presented annually to an individual who has made an exceptional contribution to the campus chapter for which he or she serves as SPJ adviser. Hirshon serves as adviser to the University’s campus chapter of the Society for Professional Journalists, which he and 11 students founded in fall 2017.

“In its 41-year history, the national award has almost exclusively been granted to advisers at universities with enrollments at least double William Paterson's size, and largely what would be considered the nation's most prestigious journalism programs, such as Columbia University and the University of Missouri, among others,” says Rob Quicke, professor and chair of the Department of Communication at William Paterson. “This is really a tremendous achievement.”

Hirshon, who was nominated for the award by members of the student chapter, was recognized for organizing educational and networking events for chapter members, including a monthly guest speaker series, field trips to news outlets in the New York metropolitan area and attendance at the Society’s regional conference. He also created and helps maintain the chapter’s three social media accounts.

In addition, William Paterson’s campus chapter was named the Outstanding Campus Chapter in the northeastern United States, which covers Connecticut, Maine, Massachusetts, New Hampshire, New Jersey, New York, central and eastern Pennsylvania, Rhode Island, and Vermont. “This distinction placed us among 10 finalists under contention for the most Outstanding Campus Chapter in the nation and put us on the same standing as chapters from some of the best journalism programs in the country,” says Hirshon. “It's very unusual for a chapter to receive such an honor after only its second year of existence and I’m very proud of what we have been able to accomplish at William Paterson.”

A member of the William Paterson faculty since 2015, Hirshon received the 2019 New Jersey Journalism Educator Award from the New Jersey Society of Professional Journalists. He is the author of We Want Fish Sticks: The Bizarre and Infamous Rebranding of the New York Islanders (University of Nebraska Press, 2018), and serves as the digital media reviews editor for the academic journal American Journalism. Previously, he was a reporter at the New York Daily News from 2005 to 2011, covering breaking and community news.

The Society of Professional Journalists is the nation’s most broad-based journalism organization dedicated to encouraging the free practice of journalism and stimulating high standards of ethical behavior.