Christine Gabbard ’94 Named a Pioneer in Artificial Intelligence by IBM 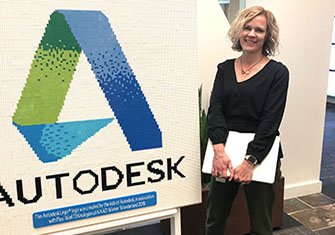 Christine (Sente) Gabbard ’94 is among 40 women from 15 different countries honored with IBM’s inaugural “Women in AI” award, celebrating women across a variety of industries for pioneering the use of artificial intelligence to advance their companies’ innovation, growth, and transformation.

Gabbard is a project manager at Autodesk, which makes software for people who make things. From product designers and engineers to architects and movie producers, Autodesk products are used across almost every industry. There, she led the team in implementing a virtual customer service agent, with the use of IBM Watson technology, which has greatly increased Autodesk’s customer service efficiency and satisfaction. Easier to solve customer cases, which previously took up to two days to resolve because of the high volume of inquiries, can now be solved by “AVA” (Autodesk Virtual Agent) in less than two and a half minutes. It is for this project that IBM recognized Gabbard.

The recognition, she says, is not only a great personal achievement, but a great achievement for the tech industry and women overall. “I’ve been in meetings where I’m the only woman,” Gabbard explains. “It’s great that companies are encouraging and representing women; we definitely need more balance in tech with women and people of color. That’s how we are going to be most successful.”

Gabbard and the team began working on AVA in 2016 and launched “her” in early 2017. “It’s really cool because now there are so many companies that are doing this,” Gabbard says, explaining how she could find little to no research or resources to help guide her project management in a then-new domain. “Just the chat part of this was so hard to get right. The team we had was so brilliant, having to think about how people would talk to this chat agent; it’s a different way of programming. You have to understand language, and what our customers are asking, and how to help people without frustrating them.

Gabbard has spent the past almost-10 years with Autodesk, where she first started as a senior quality assurance engineer, after working in software quality assurance at Sony Pictures Entertainment, BEA Systems, and AOL, among others. Last summer, she was a presenter at the 6th annual Global Big Data Conference, where she discussed how to build a sustainable and scalable conversational AI program, and she recently taught an IBM Masterclass on customer service and AI.

“I think about it sometimes and I laugh, because I was supposed to be a teacher,” Gabbard says.

A native of Belleville, New Jersey, Gabbard graduated from William Paterson with a double major in elementary education and geography. She applied for teaching positions in very competitive districts, where getting hired typically required serving as a substitute teacher first. Gabbard did just that, but grew impatient with the prospect of waiting years to secure a full-time job. She worked in a preschool, but felt the age of the students wasn’t an appropriate fit for her. So, she went out on a limb and responded to a newspaper advertisement seeking a trainer at a software company. “The person who hired me also had a teaching degree, and she told me, ‘I know, because you’re a trained teacher, that you could do this job.’”

…Then I got another job in software, testing the software, which I had done some of in the first job,” Gabbard explains. “And once I got my foot in the door in the industry, and saw what all the different roles were, I picked my path.”

Bringing people together as a leader at work, much in the same way a teacher would bring her pupils together, is a “passion” that eventually led Gabbard to become a project manager.

Her husband Mark Gabbard ’93 studied communication at WP and works as a director of product marketing. The couple moved from New Jersey to California in 1999 in order for Christine to pursue jobs in technology. They live in San Rafael with a college-bound son and high school-bound daughter.

“We say all the time that William Paterson has definitely helped us out in life,” the alumna says. “We’ve worked with people from so many different backgrounds in our careers, and William Paterson prepared us.”