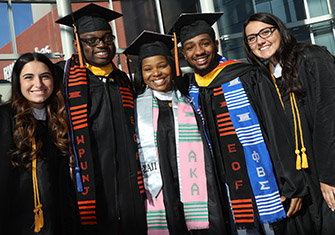 Lifelong learning is not only a privilege, but also a requirement to successfully navigate today’s competitive job market and politically-complex world. This was the prevailing message from award-winning author, columnist, and political analyst Jonathan Alter in his keynote address at William Paterson University’s 2019 undergraduate commencement ceremony on May 15.

“I’m lucky. In journalism, I’m paid to ask questions and learn the answers. It’s a free education every day,” Alter said to a crowd of nearly 2,000 graduates and 10,000 guests at the Prudential Center in Newark. But in today’s economy, he says, people in all professions must continue learning or “risk getting left behind.” 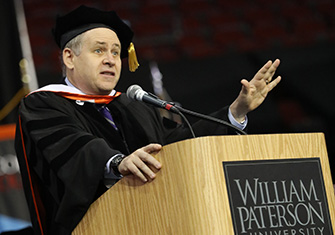 “The good news is that learning new things, saying ‘yes’ –  yes to new experiences, new challenges and new ways of looking at the world – is usually fun and invigorating,” Alter continued. “It gets you out of your comfort zone, which may be cozy, but can also be a trap that keeps you from fulfilling your potential.”

Quoting the University’s namesake, statesman William Paterson – one of only three men in American history to be governor, senator, and Supreme Court justice – Alter advised the graduates that doing what’s right, “caring about other people,” is just as important. “Without morals, there can be no order, and without knowledge, no genuine liberty.”

William Paterson University President Richard J. Helldobler, who celebrated his first commencement at WP since becoming its leader in July 2018, expressed similar sentiments in his address.

“I implore you to use your education for the greater good of all, to be civically engaged individuals, and to be ethical and moral people,” he said. “You can choose to live by these core values and you can choose to recognize and support the dignity of all people. I ask that you lead with your head, tempered by your heart.”

Heart, too, was a central theme of William Paterson’s 196th commencement ceremony.

“Before becoming a student at William Paterson, I never expected to encounter such a kind and welcoming environment, an environment that made me feel part of a family,” said Class of 2019 Valedictorian Kevin McKiernan, of Morris Plains, New Jersey, at his turn on the microphone. He earned degrees in Asian studies and history, notched a perfect 4.0 grade point average, and will pursue a PhD in Asian literatures, cultures, and media with the hopes of becoming a professor and researcher. “… I will never forget the four years that I spent in this tiny school in Wayne, New Jersey with the biggest heart. I hope that everyone here won’t forget it either.”

Arguably one of the biggest hearts on campus has been Frederick L. Gruel. During the ceremony, he received the president’s medallion – the highest honor to be bestowed at William Paterson – “awarded to individuals who have made outstanding contributions to the University community, and who provide a positive role model through their outstanding service.”

Gruel has been a member of University’s board of trustees for more than 26 years and a member of the William Paterson University Foundation for 20. A strong advocate for public higher education, Gruel and his wife Susan made a generous contribution to WP to create an endowed scholarship supporting full time, first-generation college students who demonstrate academic excellence and financial need. 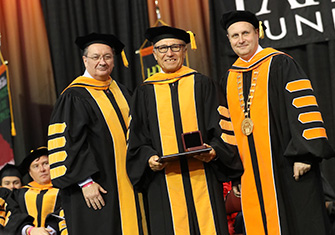 Gruel retired in 2013 as president and chief executive officer of the AAA New Jersey Automobile Club and its subsidiaries, the AAA New Jersey Insurance Agency and the AAA New Jersey Car Care Center. He has been a strong supporter of travelers’ rights, as well as the safety of drivers, passengers, and pedestrians. Through Gruel’s leadership, key legislative initiatives have been passed, including graduated driver’s licensing, occupant protection, child passenger safety, auto insurance reform, and transportation funding.

"There are few people who would be better examples of how you can make a difference for yourself, your family, and others than Fred Gruel," President Emeritus Arnold Speert told the graduates, leading into the presentation of the medallion.

Also recognized at the ceremony was its keynote speaker, Jonathan Alter, who was presented with an honorary doctor of humane letters degree for his excellence and achievements as a journalist and author, and for “his deep commitment to the role of the media in the American political process.”

Alter, a New York Times Best-Selling Author, has covered every presidential election since 1984, and written extensively on politics, education, fiscal policy, terrorism, anti-Semitism, at-risk children, and national service. He was recently inducted in the New Jersey Journalism Hall of Fame, and his many awards include first prize from the National Headliner Awards for a series of columns on life after 9/11, the John Bartlow Martin Award for his reporting on the death penalty, and the Gerald Loeb Award for Distinguished Business Reporting. He was also part of the teams of Newsweek reporters and editors awarded the prestigious National Magazine Award for General Excellence in 1993, 2002, and 2004. He is currently at work on a full-length biography of former President Jimmy Carter.

“It is crucial for you to have a seat at the leadership tables—your degree provides you a key to walk through the door, crash the glass ceilings, and earn a place at the table,” President Helldobler told the graduates. They range in age from 20 to 58, and nearly 42 percent of them are the first in their families to graduate from college. “We need you there, our country needs you there, the world needs you there.”

“Go out and do great, important things,” he urged the graduates. “Make us proud. And most importantly, make yourself proud.”