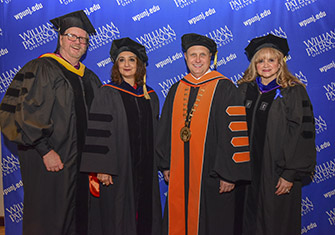 Marina Budhos, professor of English, Christian Holle, associate professor of psychology, and Susanna Tardi, professor of sociology, were honored as the recipients of the 2019 Faculty Excellence Awards, which were presented during the University’s 2019 Undergraduate Commencement ceremony on May 15 at the Prudential Center in Newark.

Since coming to the University in 2004, Budhos has published five books and has two more under contract. A writer of young adult novels, stories, and nonfiction, her books have won critical acclaim. Her 2010 novel Tell Us We’re Home was praised by the New York Times as “elevated by writing that is intelligent and earnestly passionate.” Her books celebrate diversity, including Watched, which garnered the Asian/Pacific American Award for Literature and was a finalist for the Walter Dean Myers Award presented by We Need Diverse Books. Also among her awards are the New Jersey State Council on the Arts Fellowship (2013, 2017), the EMMA Award (Exceptional Merit Media Award), and the Rona Jaffe Award for Women Writers. She was the inaugural winner of the James Cook Teen Book Award in 2007. Her non-fiction works have been finalists for the Young Adult Library Services Association (YALSA) award. Budhos also was a Fulbright Scholar in India. She teaches undergraduate and graduate courses in creative writing, creative nonfiction, writing for young adults, and autobiographical writing, as well as introductory literature and drama. A graduate of Cornell University with a bachelor’s degree in English, where she won the George Harmon Coxe Award in Creative Writing, Professor Budhos also holds a master’s degree in creative writing from Brown University.

Holle’s classes always fill first, reports his chair. Peer evaluations of his teaching note that he is passionate, engaging, and able to lead his students to understand complex psychological concepts—a must for a professor of social and cognitive psychology teaching topics such as perception and visual imagery, emotional wellbeing, race, religion, and gender. Holle has mentored and sponsored 62 students in research and conference presentations. With perfect student course ratings for all but two of more than 100 courses taught for the past 18 years, it is no surprise that Holle was chosen as a model teacher for the University’s Center for Teaching Excellence. He received the College of Humanities and Social Sciences Award for Teaching in 2017 along with Best Dedication and Best Support of Student Research awards at several annual psychology research conferences. Holle holds a bachelor’s degree in psychology from San Diego State University and master’s and doctoral degrees in clinical psychology from the University of Albany, State University of New York.

Tardi brings a long and distinguished record of service to the Department of Sociology and to the University. A member of the Curriculum Committee for many years, including as chair, faculty advisor to Alpha Kappa Delta honor society, and longstanding academic advisor, Tardi brings integrity, enthusiasm, and commitment to her department. A committed University member, she has served for 19 years on Faculty Senate and 17 years as president of the American Federation of Teachers (AFT) Local 1796. She has participated on search committees for both the University president and provost and chairs the Employee Scholarship Committee. Outside of William Paterson, Tardi serves her community and state as executive vice president for higher education of the AFT of New Jersey, legislative representative of the Council of New Jersey State College Locals, and chair of the Higher Education Leadership Council. She was appointed to Governor Phil Murphy’s Higher Education Transition Team. Tardi earned her bachelor’s degree in sociology and psychology from Kean College of New Jersey and her master’s and doctoral degrees n sociology from New York University.