Along with his success as a leader in various William Paterson University organizations, the graduating senior is respected for his commitment to civic engagement 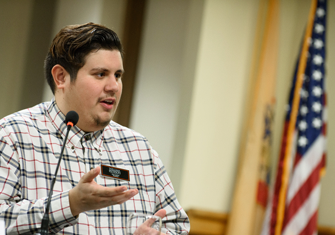 In addition to serving as this year’s Student Government Association president and last year’s executive president of Greek Senate, his very long list of extracurricular roles on campus includes working as an orientation leader to assist new students with the adjustment to University life; a Pioneer Leadership Institute mentor, charged with conducting emerging leader workshops for first-year students; and both a tutor and residential coordinator for students attending WP through the Equal Opportunity Fund (EOF), which provides financial and personal support to those from educationally and economically disadvantaged backgrounds.

A public relations major, Guedes is an EOF student himself and has previously received an award from program leaders for being “most inspirational.”

“It’s about believing that we’re more than just students from low-income families; we’re actually here to do bigger things on campus and in life,” explains Guedes, who will be the first in his family to graduate college. Students who were raised in lower-income neighborhoods “expect to fail,” he adds, “but it’s about how you get up and push past the hard times.”

Helping others going through hard times is a passion that has driven Guedes to serve those beyond the campus, too.

He was one of 218 students in the nation and one of only five in New Jersey to receive the 2016 Campus Compact Newman Civic Fellows award for civic engagement. He has volunteered his time and talent to the Boys and Girls Club, community soup kitchens, food pantries, park cleanups, and meal-packaging activities for both local agencies and the international Stop Hunger Now. Guedes has also taken part in the University’s alternative spring break trip, wherein students and staff restore cabins at a YMCA camp that serves high-risk youth, and he recruited volunteers for a Habitat for Humanity build in which he took part.

“I had to utilize a lot of these programs when I was growing up,” Guedes explains, recalling visits to a local food pantry and community-supported daycare center as a child. “This was the first time I could volunteer to these places that gave so much to me and my family, which is important. The next generation has to give back.”

All of his extracurricular involvement at William Paterson, particularly its EOF program, has led Guedes to his professional calling: He is headed to Salem State University in Massachusetts to pursue a master’s degree in higher education student affairs.

“I was really nervous going to college, and going through the EOF program was a great transition. It was the first time I really felt like I fit in somewhere. It gave me a great sense of home, and it was my first experience of having someone who wasn’t in my family really care about me and want to see more for my future,” Guedes says. “I want to able to be ‘somebody’ for someone else, and show them that anything is possible.”

Before his first semester of graduate school, Guedes will complete a summer internship in higher education at University of Tennessee, Knoxville through the National Association of Student Personnel Administrators (NASPA) Undergraduate Fellow Program, which aims to increase the number of historically disenfranchised and underrepresented professionals in student affairs and/or higher education.