Selections will include musical numbers from Show Boat, The Pajama Game, Sweeney Todd, Pacific Overtures, A Little Night Music, and West Side Story 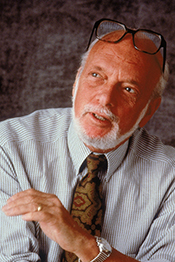 Twenty-one of the University’s music students will perform selections from six of Harold Prince’s award-winning Broadway shows on May 1 as the producer and director speaks at the University as part of the Distinguished Lecturer Series in Shea Center for Performing Arts on campus. Prince will discuss his life and legendary career. Vocal and instrumental students from the University’s Department of Music will perform selections from musicals that Prince directed or produced.

The students, who were selected through a rigorous audition process by music department faculty, will perform musical numbers from Show Boat, The Pajama Game, Sweeney Todd, Pacific Overtures, A Little Night Music, and West Side Story.

Harold Prince’s theatrical career has spanned more than six decades. He has directed and produced more than 50 plays, musicals and operas; his repertoire of theater productions include Cabaret, The Phantom of the Opera, Candide, West Side Story, Evita and Fiddler on the Roof, to name a few. He has 21 Tony Awards—more than any other person. He was awarded the American National Medal of the Arts in 2000 by the National Endowment of the Arts in Washington, D.C. In 2006, Prince received a special Tony Award for Lifetime Achievement.