The award honors students who use their “voice” to speak up and take “action” on their campus to create change for LGBT individuals. 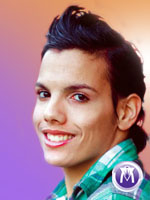 Mark Travis Rivera, a William Paterson student majoring in communication and women’s and gender studies, has been named a recipient of the 2013 Voice & Action Student Leader Award. The award is presented by Campus Pride, the leading national organization for LGBT student leaders and campus groups, in conjunction with OUTmedia.

The Campus Pride Voice and Action Student Leader Award recognizes the outstanding accomplishments of young adult leaders at colleges and universities across the nation. The award honors students who use their “voice” to speak up and take “action” on their campus to create change for LGBT individuals.

“The talent and commitment to the movement shown by all the applicants is the reason Campus Pride developed this national honor,” said Voice & Action Award Committee Chair Christopher Bylone of Rivera and fellow recipient Katherine Barnes of St. Olaf College.  “These two students have gone above the call of duty expected of any student leader in our movement.”

Rivera served as the president of CHOSEN: the Gender & Sexuality Alliance and is the founder and artistic director of Marked Dance Project. The award will be presented at the Northeast LGBT Conference at Rochester Institute of Technology from April 12 to 14, 2013. He also was one of Campus Pride’s Top 10 Leaders in Action announced earlier this year.