She is honored for providing opportunities for women and minority students in STEM (Science, Technology, Engineering, and Mathematics) 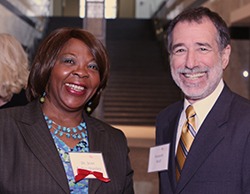 Jean Fuller-Stanley, PhD, associate dean of the College of Science and Health and professor of chemistry at William Paterson University, received the Liberty Science Center Women in STEM Award during the center’s Annual Luncheon on December 9 in Jersey City.

The STEM award is presented annually to women in the New York metro area in recognition of their outstanding contributions in the STEM (Science,Technology, Engineering, and Mathematics) fields. Fuller-Stanley works to engage students in active learning, and has been and continues to be instrumental in promoting undergraduate research as an important facet of retaining underrepresented minority students in sciences, and continues to advise and mentor students, especially women who are pursuing a science major. She was instrumental in joining with Rutgers University and other N.J. institutions to secure funding from the National Science Foundation for the Louis Stokes Alliance for Minority Participation in Science to increase the number of underrepresented minority students who graduate with a bachelor’s degree in the sciences.

Fuller-Stanley holds a doctorate and master’s degrees from the University of Nebraska-Lincoln, and a bachelor’s degree from University of London (Bedford College), London, England.