A new $18,500 grant from the Japan Foundation will support the University’s expanding Japanese language education program. 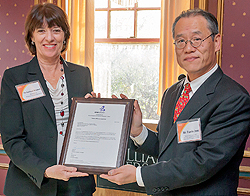 The $18,500 grant, which provides support for William Paterson’s growing Japanese language program, was formally presented to President Kathleen Waldron by Fumio Iwai, Deputy Consul General and Director of the Japan Information Center at the Consulate General of Japan in New York, during a recent ceremony in Hobart Manor on campus.

“The College of Humanities and Social Sciences is very honored to see our multidisciplinary Asian Studies Program recognized by Japan Foundation and the Consul General of Japan in New York. The grant serves William Paterson’s University’s efforts in promoting and strengthening regional knowledge of Japanese language and civilization,” says Kara Rabbitt, dean of the College of Humanities and Social Sciences. “This grant will support additional instruction in Japanese during the period of award and allow us to continue to build on what has become a very dynamic and popular program on our campus.”

During the fall 2012 semester, 116 students from widely diverse backgrounds are enrolled in Japanese language classes, with an additional 17 students enrolled in Japanese literature courses taught in English. William Paterson is one of the few institutions in New Jersey to offer a full four-year course of instruction in Japanese language education within its rapidly growing Asian Studies Program.  Established in 2006, the Asian Studies Program offers a B.A. degree with concentrations in East Asian studies, South Asian studies, or Asian languages.  The Asian languages concentration also provides teacher training tracks in Japanese and Chinese.