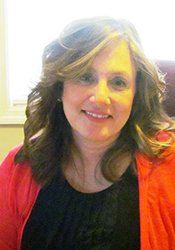 Drawn to social justice issues since she was a young teenager, Jill Zinckgraf ’00 has been helping women, children and men, cope with such issues as domestic violence, sexual assault, and teen dating abuses.

She views these issues and many others through the lens of leadership—she was appointed executive director of the Domestic Abuse and Sexual Assault Crisis Center of Warren County last June, an agency that provides services to victims of violence or abuse. On call twenty-four hours a day, she supervises and trains a staff of twenty-eight counselors. Administratively, she is responsible for crisis management, public relations, fundraising, and sits on the center’s board of trustees.

I’m right where I’m supposed to be,” she says. “ I owe a lot to William Paterson, it gave me my voice for advocacy.”

Zinckgraf was a non-traditional student. “At the age of thirty, with three children, a stepdaughter, and a husband to care for, I decided to continue my education. I had been working in the field of violence against women first as a volunteer and later as an employee. I stumbled into this field because of my interest in social justice.”

She enrolled as a women’s studies major, was a member of the University’s Honors College, and graduated in 2000.

Zinckgraf considers herself a compassionate person. “Early on, women began telling me their story, and it changed my life,” she says. “As a result, I’ve spent my life empowering women. People open up to me, and when they find out what I do, they open up even more. That is testimony not to me, but to the work that still needs to be done for the violence to stop.”