Rivie, a senior majoring in biology, won a first place award for his poster presentation at the Annual Biomedical Research Conference for Minority Students (ABRCMS) 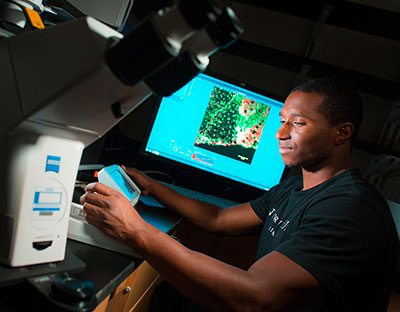 Now in its 14th year, ABRCMS is one of the largest, professional conferences for underrepresented minority students and students with disabilities to pursue advanced training in science, technology, engineering and mathematics (STEM), attracting approximately 3,600 individuals, including 1,900 undergraduate and postbaccalaureate students, 400 graduate students and postdoctoral scientists and 1,300 faculty, program directors and administrators. During the four-day conference, more than 1,500 students participated in poster and oral presentations in twelve disciplines in the biomedical and behavioral sciences. All undergraduate student presentations are judged; Rivie was one of 12 undergraduate awardees in the physiology research.

Rivie’s poster presentation grew out of his work as part of an interdisciplinary research project conducted by Jaishri Menon, professor of biology, and Kevin Martus, professor of physics. Menon, an expert in physiology and vertebrate morphology, is studying tadpole metamorphosis and tail regeneration and collaborated with Martus, an expert in plasma physics, to look at wound healing after being exposed to a plasma jet. Rivie, who began working in the lab in 2012, won several awards, including a second place award in the biological sciences category at the 2014 Emerging Researchers National Conference in STEM held in Washington, DC and a second place award at William Paterson University’s 8th Annual Undergraduate Research Symposium in the Biological and Chemical Sciences, held in April 2014.   He is a resident of Newark.