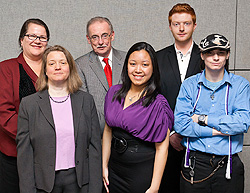 “Phi Sigma Tau recognizes the many accomplishments of philosophy majors, including high GPAs and papers given at philosophy conferences,” Andrew says. “Students’ membership in the international group gives them access to connections with many other philosophy majors and faculty pursuing research and publishing and graduate education.  Phi Sigma Tau also creates a group of similarly interested, talented people on campus, who want to talk about philosophy outside of the classroom.”