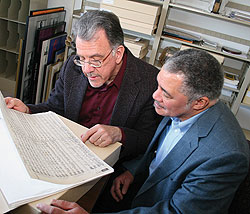 The origin of a famous quote on the significance and beauty of jazz attributed to Martin Luther King Jr., his only known commentary on the subject, has been uncovered by David Demsey, William Paterson University professor of music and coordinator of jazz studies, and Bruce Jackson, William Paterson master's degree alumnus and a jazz drummer. The research appears in the January 2011 issue of DownBeat magazine.

The quote is universally misattributed as being from a speech given by King at the 1964 Berlin Jazz Festival. Demsey’s and Jackson’s research reveals that King was never actually at the festival, but provided his thoughts on jazz as a foreword for the event’s printed program, at the invitation of the Berlin Festival organizers.