McGuinness, an assistant professor of music, is nominated for two 2015 Grammy Awards tunes from his latest CD, "Strength in Numbers" 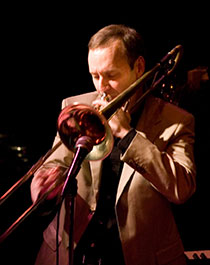 Pete McGuinness, an assistant professor of music at William Paterson University in Wayne and an acclaimed jazz composer/arranger, trombonist and vocalist, has been nominated for two 2015 Grammy Awards in the arranging category.

McGuinness was nominated for Best Arrangement: Instrumental or A Cappella for "Beautiful Dreamer" and Best Arrangement: Instrumental And Vocals for "What Are You Doing The Rest Of Your Life?" Both tunes are from his latest CD, Strength in Numbers, the second release from the Pete McGuinness Jazz Orchestra. The Grammy Awards ceremony will take place in Los Angeles on Sunday, February 8, 2015.

McGuinness has appeared on more than 40 recordings, including three previous releases as a leader: First Flight with the Pete McGuinness Jazz Orchestra, Voice Like a Horn and Sliding In. He earned a 2008 Grammy nomination for his arrangement of “Smile” from First Flight and was the first prizewinner of the 2010 Jazzmobile Vocal Competition, judged by the late Dr. Billy Taylor and Barry Harris.

A New York resident, McGuinness studied with Bob Brookmeyer and Manny Albam at the prestigious BMI Jazz Composers Workshop and has performed in the big bands of such acclaimed leaders as Lionel Hampton, Jimmy Heath (featured as a vocalist as well) and Maria Schneider, appearing on her Grammy-winning album, Concert In the Garden.  A member of the William Paterson jazz faculty since 2011, McGuinness is an active composer and arranger whose music is performed by both college and professional big bands across the country, as well as in Europe.