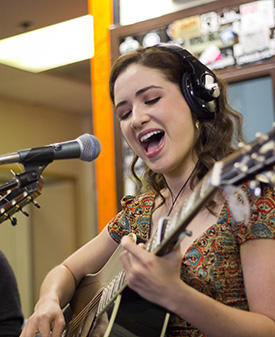 An unprecedented 24 hours of live college radio programming will start at 12:01 a.m. Every hour hundreds of college stations across the country will “pass the baton” to each other with special programs planned.

“This is our fifth College Radio Day, and the energy and excitement continues to grow year after year. I’m very proud of our students here at WPSC for putting so much effort into this year’s event. It should be a great day!” says Quicke.

Over the last five years, College Radio Day has become an annual tradition on hundreds of college campuses across the country, and has attracted supporters such as Moby, Andrew WK, Coldplay and even President Obama. Since 2012, the event has become known internationally as World College Radio Day, with nearly 42 countries across around the world celebrating the occasion in their own cultures and languages.

College Radio Day was established to counter the trend of colleges and universities selling their radio station licenses, often valued in the millions. The aim of College Radio Day is to ask people to tune in to their local area college radio stations, support this unique programming, and underscore the importance and power of college radio to the universities and colleges they represent globally.