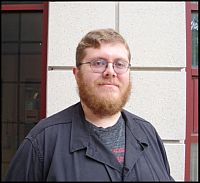 Robert Graham was appointed Principal Library Assistant in the Periodicals/Document Delivery Department on May 16, 2016.  In this capacity, Robert serves as the evening supervisor for the department.  He is responsible for entering the Library’s newly received print periodical subscriptions properly in the online catalog, Voyager.  Robert is also accountable for the stack maintenance of the print periodicals, and he assists in fulfilling document delivery requests.  One of his future projects will be the creation of an online resource guide (LibGuide) for the department.

While Robert is new to the Periodicals/Document Delivery Department, he is a familiar face in the Library.  He has worked at the Cheng Library since the fall 2011 semester as a student assistant and part-time employee with the Lending Services Department.  During this time he also completed the requirements for a B.A. degree at William Paterson University, and he graduated in May, 2015 with a double major in economics and history.

On a personal note, Robert is an avid reader who enjoys biographies, books on history and even the occasional economics text.  He is also a current movie aficionado and attempts to see all of the films, in all the categories, nominated for an Academy Award before the annual ceremony.

Robert enjoys working with his new colleagues in the department who have been helpful in orienting him to new surroundings.

About his new position, Robert said, “It is different, yet still familiar. Some of the processes are similar to those in Lending Services, but other procedures are different.  I am happy to be learning new things about the Library.”