The Library mourns the passing of benefactor, Lorraine Cheng. 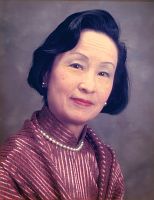 Lorraine Cheng, benefactor of the David and Lorraine Cheng Library, died on December 29, 2012.  She was eighty-six.  Mrs. Cheng was the wife of the late David Cheng, a former member of the William Paterson University’s Board of Trustees.  Mr. and Mrs. Cheng gave a major bequest to the University, and the Library was renamed in their honor in 2001.  The annual interest from the endowment created by the Chengs enables the Library to make special acquisitions to enhance the collection and to purchase additional academic resources.

“The endowment established by the Chengs has enabled the Library to implement a plan of annual, supplemental purchases of scholarly resources.  As a result of this generous gift, the collection is continually improved, and the students have benefitted from these additional materials.” commented Anne Ciliberti, Dean of the Cheng Library.

Before retiring, Lorraine Cheng was employed for 31 years at Hoffman-La Roche in Nutley, New Jersey.  She held a number of positions at the company and was director of scientific information when she retired in 1994.  Mrs. Cheng earned a Master of Science degree in biochemistry from Cornell University.  She is survived by her children, Kenneth and Gloria, and a granddaughter, Michelle.