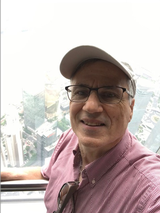 Stephen R. Shalom got his Bachelor's degree from M.I.T., his Master's from Northeastern, and his Ph.D. in Political Science from Boston University. He began teaching at William Paterson in 1977. He is the author of The United States and the Philippines: A Study of Neocolonialism (1981); editor of Socialist Visions (South End Press, 1984); author of  Imperial Alibis: Rationalizing U.S. Intervention After the Cold War (South End Press, 1993); co-editor of The Philippines Reader (South End Press, 1987), Bitter Flowers, Sweet Flowers: East Timor, Indonesia, and the World Community (Rowman & Littlefield, 2001); author of the text Which Side Are You On? An Introduction to Politics (Longman, 2003); and editor of  Perilous Power: The Middle East &U.S. Foreign Policy. Dialogues on Terror, Democracy, War, and Justice by Noam Chomsky and Gilbert Achcar (Paradigm Publishers, 2007). He is on the editorial board of New Politics and on the executive board of the Gandhian Forum for Peace & Justice.