Welcome to the William Paterson University Woodwinds - if you play flute, clarinet, saxophone, oboe, or bassoon, this is the place for you!

Our close proximity to New York City attracts world-class woodwind faculty. You will study privately with a faculty member who is on the cutting edge of the profession. Our faculty members perform throughout the NYC metropolitan area, and tour around the world with the New Jersey Symphony Orchestra, St. Luke’s Chamber Orchestra, New York Philharmonic Orchestra, Metropolitan Opera Orchestra, Broadway shows, with groups such as Paul Simon and Todd Rundgren, and in many area chamber ensembles.

Our focus is on diverse and abundant performing opportunities. You will be involved with chamber ensembles, orchestra, wind ensemble and contemporary music ensembles.   You can even form your own ensemble and receive faculty coaching. WPU ensembles regularly perform both on campus and off campus, presenting concerts in public schools, local churches, and on public concert series. You will be encouraged to explore diverse musical styles and genres.  You will have opportunities to improvise, compose, and arrange for student ensembles.

I would love to hear from you. No question too small or large!

Please email me at this address:
demseyk

I hope to hear from you soon,

*Karen Demsey - flute, Area Coordinator
MM Eastman School of Music, DMA Rutgers University, is Professor of Flute and Musicology and Coordinator of Woodwinds at William Paterson University of New Jersey. She has published articles on flute pedagogy, and presents workshops and masterclasses nationally and internationally. She is currently doing research in the US, UK, and Europe for an upcoming book on innovative teaching in performance pedagogy, and recently presented her research at the International Society for Music Education Conference in Thessaloniki, Greece, and at the College Music Society National Conference in the US.

Ms. Demsey has premiered numerous works nationally and internationally. She recently performed as a soloist throughout China, and as a member of the International Flute Orchestra on tours of Italy, Spain, Belgium, the Netherlands, Croatia, Slovenia, and Turkey. Her solo album, “Recollections of the Inland Sea,” internationally distributed on Capstone Records, features music for flute and marimba with Greg Giannascoli, including the premiere of a work commissioned for the duo.

She is Co-Director of the Artists International Award-winning chamber group, UpTown Flutes, and is featured on their four albums, including the just-released “Streaming Dreams” featuring works by two composers in the ensemble. UpTown Flutes’ Carnegie Hall debut was described in New York Concert Review as “organic... mesmerizing.... UpTown Flutes deserves major attention as they are top-notch and one of a kind.”

Andrea Herr - bassoon
Andrea Herr, bassoonist and contrabassoonist, has performed with the New York City Opera, the New Jersey Symphony Orchestra and the American Symphony Orchestra. She has held Principal Bassoon positions in Spain with the Orquesta Sinfonica de Galicia and Opera Teatro Galicia. Noted performances include premieres of new chamber music works by Lalo Schifrin, Joan Tower and Keith Jarrett with the Dakota Wind Quintet, as well as many New York Broadway productions including Into the Woods, Phantom of the Opera, Fiddler on the Roof, and West Side Story. Other appearances include orchestral and chamber music performances with the Lincoln Center Festival, Paris Opera Ballet, the Bach Aria Festival and the Bronx Arts Ensemble. Recently she traveled to India with members of the Metropolitan Opera to perform with Music for Life International. Ms. Herr holds degrees from the New England Conservatory, Manhattan School of Music and the Juilliard School. An adjunct faculty member of William Paterson University since 2016, Ms. Herr also teaches and has given master classes at New Jersey City University, Kean University, Drew University and Juilliard Pre-College.

Andrew Lamy - clarinet
Clarinetist Andrew Lamy has received consistent critical acclaim for his sweet, colorful tone, liquid phrasing, immaculate technique, and his energetic performance style. Mr. Lamy has performed live national and international broadcasts with the Metropolitan Opera and the New Jersey Symphony Orchestra, is a founding member of the Halcyon Trio, and has collaborated with the Artis Quartet of Vienna, the Getty Center, the Lincoln Center Festival, the Mixed-Flock Orchestra Project, and the Mad Coyote Ensemble. His solo engagements include concerti with the Knoxville Symphony Orchestra, the Haddonfield Symphony Orchestra, the North Shore Philharmonic, and the New Jersey Symphony Orchestra. Mr. Lamy has also performed with the New York Philharmonic, the American Symphony Orchestra, American Ballet Theater, the Concordia Orchestra, and the Royal Opera of London. Mr. Lamy has appeared as a guest teacher at The Juilliard School, USC, CSU Northridge, Occidental College, Rutgers University, University of Tennessee, University of Maine, Bard College, and the Cal Arts Institute. Students of Mr. Lamy have gone on to attain professional positions in the Milwaukee Symphony, The Pacific Symphony, and the Santa Fe Opera.

James Noyes - saxophone
“A monumental force of ideas and energy” (Saxophone Journal), James Noyes has performed with the Long Island Philharmonic, Juilliard Symphony Orchestra, Manhattan Chamber Sinfonia, Susquehanna Symphony, Disney’s All-American College Orchestra, Argento New Music Project, New York Arts Ensemble, David Amram, Rosemary Clooney, Toni Tennille, Sam “Soul Man” Moore, Soul Gypsys, and the Doobie Brothers. He led the SURGE Saxophone Quartet to a first prize at the 28th Artists International Chamber Music Competition, where they presented a recital of works written for the quartet at Carnegie Hall’s Weill Recital Hall. In his live performances, Noyes is renown for a sound that is both “entrancing in its dreamy melancholy” (New York Concert Review) and a “shape-shifting mass of pure expression” (I Care if You Listen). His studio recordings include Shadowcatcher, with Eric Ewazen and the Juilliard Wind Ensemble (New World Records), and Imaginings (self-produced), which features solo works written for him by Eric Nathan, Steve Cohen, Michael Patterson, Richard Miller, and Rich Shemaria. An avid scholar of saxophone history and the music of Claude Debussy, his articles appear in The Musical Quarterly, Saxophone Symposium, Saxophone Journal, and Journal of the American Musical Instrument Society. He was also a featured columnist in Saxophone Today, an online magazine. Formerly on the faculty of the Pennsylvania State School of Music (theory, jazz history, saxophone), Dr. Noyes presently serves on the faculties of William Paterson University (saxophone) and Manhattan School of Music Precollege Division (theory/ear training – former Theory Department Chair, chamber music, saxophone), and as Artistic Director of MOSA (Music at Our Saviour’s Atonement), a concert series in upper Manhattan. He is also the composer of over fifty works, including songs of Equinox Liturgy (2006), The Way of Ascension (2013), and Festival of Light (2014). He earned the Doctor of Musical Arts degree from Manhattan School of Music (Helen Cohn Award for outstanding doctoral student), where his teachers were Paul Cohen (saxophone), Nils Vigeland (theory), and Kenneth Cooper (performance practice).

Timothy Ruedeman - saxophone
Timothy Ruedeman, saxophonist, performs actively as a soloist, orchestral and chamber musician and is a member of the New Hudson Saxophone Quartet and Flexible Music. Highlights of recent and upcoming seasons include engagements at the Lincoln Center Festival, Miller Theatre, Avery Fisher Hall, Tilles Center, and solo appearances with the Manhattan Chamber Orchestra and Hanover Wind Symphony. Mr. Ruedeman has given the premieres of over fifty new works for saxophone, and has appeared with the Long Island Philharmonic, Charleston Symphony, Philharmonia Virtuosi, Absolute Ensemble, Merce Cunningham Dance Company, and the S.E.M. Ensemble. His recordings include the Naxos, Helicon, Allegro Records and Centaur labels. Mr. Ruedeman is currently on faculty at William Paterson University, NYU, and Long Island University. He holds a B.M. from the Oberlin Conservatory of Music and a Masters degree from NYU where he is the recipient of the Founders Fellowship for Doctoral Studies and is currently completing his Ph.D. 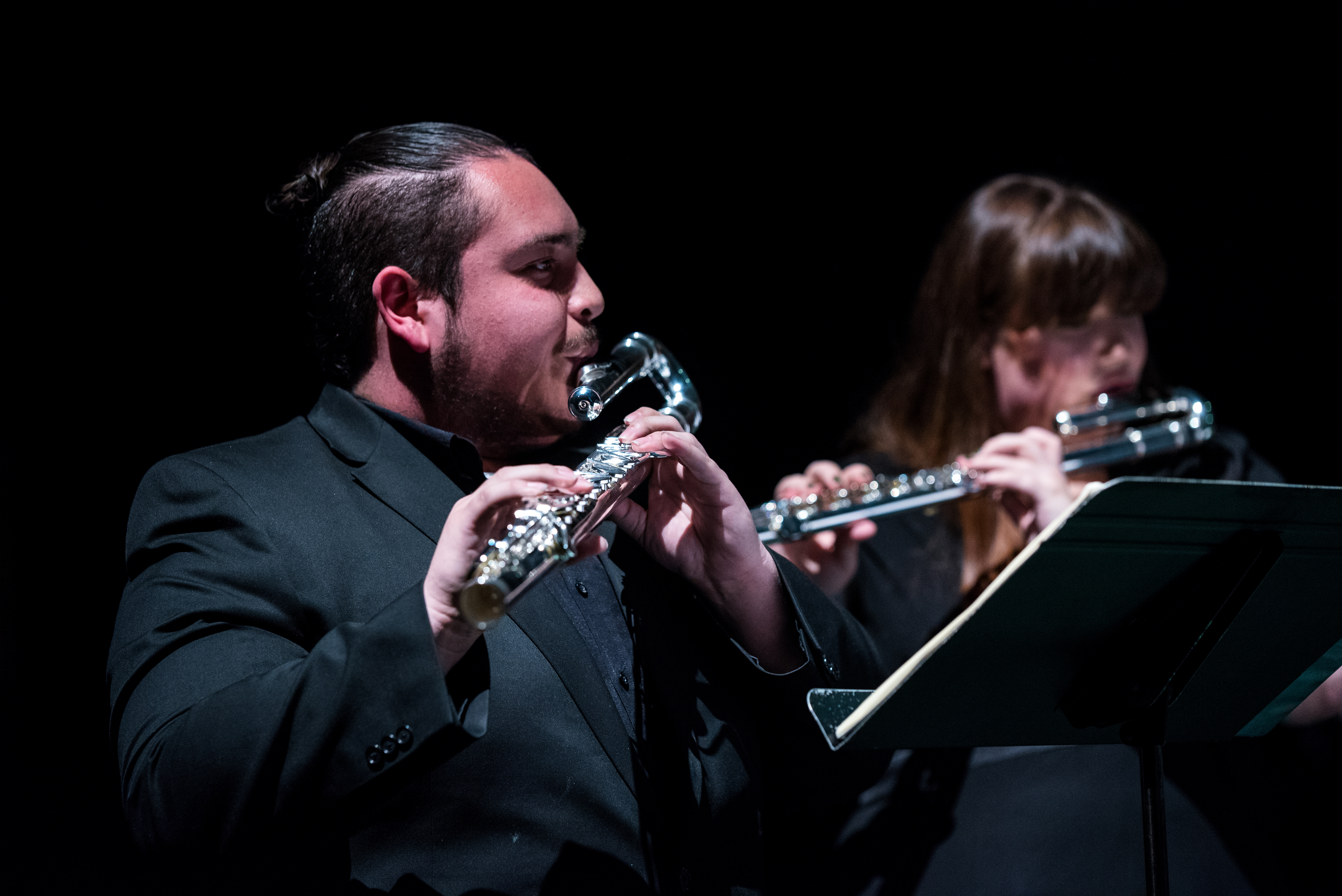