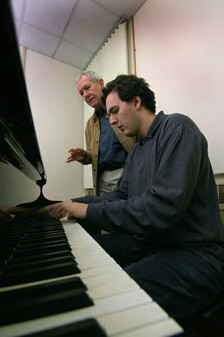 The piano performance area is a unique combination of students from all degree programs who by audition have piano as their major instrument. This includes programs in Classical Performance, Music Education, Music Management, Sound and Engineering Arts and Jazz Studies. All students pursue a comprehensive program emphasizing all of the classical musical styles from the Baroque Period to music written in the 21st century. Several graduates have received international recognition as concert pianists, others have gone on to top graduate schools while many have created private teaching studios, play for theater productions, have regular church or synagogue jobs and perform chamber music. Those with degrees in Music Education hold positions throughout the state of New Jersey.

The internationally acclaimed piano faculty combines the best of the European traditions and techniques with recent trends in modern music. We make no difference between jazz and classical styles but concentrate on educating our students to perform good music well. Our piano faculty has received recognition throughout the world as superior performers as well as distinguished pedagogues. They perform as soloists, chamber musicians and give master classes  in Europe, Asia, South America, Canada and Russia.

Please see the list of Audition Requirements for piano

Carl Patrick Bolleia
Regarded as a "strong pianist" by New Music Connoisseur and "an uninhibited player" by New York Concert Review, Carl Patrick Bolleia has collaborated with musicians of the The Metropolitan Opera Orchestra, New York Philharmonic, and New Jersey Percussion Ensemble. Performances as soloist, conductor and collaborative pianist have occurred at Carnegie Hall Issac Stern Auditorium, Carnegie Hall Weill Recital Hall, (le) poisson rouge, Merkin Hall, Spectrum, NJPAC,Vienna ConcertoFest in Austria, Vianden Castle and Centre Cultural Larei in Luxembourg, Brevard Music Center, Northwestern University New Music Conference, University of Scranton, The Intersection of Jazz and Classical Music Piano Conference at West Virginia University, South Oxford Space Brooklyn, and numerous engagements on the New Music Series at William Paterson University. He has recorded for Composers Concordance Records distributed by Naxos, and MSR Classics. “CME Presents: Piano Celebration”, which was hailed by Gramophone for "show[ing] a heightened affinity for the music… savouring the novel, harmonic flights in Frederic Rzewski's Down by the Riverside” and by Fanfare as “capturing all of the quirkiness and chameleon changes of the score... it arrives like a blaze of light, and continues to glow magnificently.” Niederösterreichische Nachrichten heralded his Austrian premiere of Jinsil Lee’s, The Beginning: Concerto for Piano and Orchestra, as “The highlight of the evening...” described his playing as “excellent... [which] received frenetic applause.” He is adjunct professor of piano and collaborative piano at William Paterson University, and lecturer of music at Rutgers University where he teaches seminars in collaborative piano and 20th-21st Century Performance Practice, and conducted the modern music ensemble Split the Lark.

Primary piano studies have been with Ursula Oppens, Min Kwon and Gary Kirkpatrick. Masterclasses with classical and jazz pianists ranging from Alan Feinberg, Nicolas Hodges, Fred Hersch and Dr. Billy Taylor. He holds the Doctor of Musical Arts in Piano Performance from Rutgers, where his dissertation was entitled "Taxonomy of Musical Gesture and Hermeneutic of Narrative and Diatonic Continuity in the Piano Music of Charles Wuorinen." Additional pursuits include the study of sacred music at The Institute of Sacred Music at Yale University and Gregorian Chant at the Wethersfield Institute, organ studies with Renée Anne Louprette, harpsichord studies with Rebecca Cypess and at Amherst Early Music with Arthur Haas and Peter Sykes, and the transcription and arrangement for the 125th Anniversary Promotional Campaign of Dr. Pepper. He began his career as a liturgical musician at the age of 13 and has served from monasteries in rural Illinois to cathedrals and churches in Italy, Barbados, and as Director of Sacred Music in the Archdiocese of Newark and Diocese of Paterson.