We also offer an MBA, Music and Entertainment Management Concentration 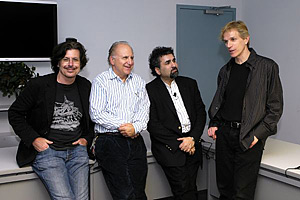 In addition to the University’s admission requirements:

"More that just talent: What Characteristics does a successful jazz/classical artist in the performance field cureently need to make it as a successful recording artist?"
by Grace Talusan

"How Does the Negative Protrayal of Women in Rap Music Impact the African American Executive Woman's Path to Success in the Music Industry?"
by Tahese Toney

"How Video Game Soundtracks are used as a marketing tool and perceived by the consumer: An investigation of Why they do not sell"
by James Dean

"Quincy Jones: A model of a Renaissance Man of the Entertainment Industry"
by Hal W. Weary

"Downloading: An Artist's Trick or Treat"
by Sonya Impelluso

"Middle Management Women in the Music Industry: Their Paths, Their Lives, Their Stories"
by Keresse Chinara Burton

"Learning From the Movies: Can Theatrically Released Hollywood Comedies Be Used to Teach College Students About the Music Industry"
by Daniela Schmitz

"Duties and Attributes of the Artist Manager: A Preliminary Investigation"
by Geoff B. Sawyer