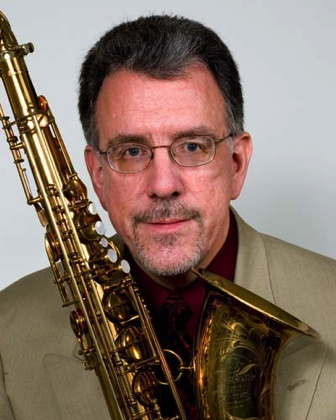 
David Demsey is Professor of Music and Coordinator of Jazz Studies at William Paterson University. He earned a doctorate at the Eastman School of Music and received a Master of Music in Saxophone from the Juilliard School. He has performed with the New York Philharmonic since 1995, including their 2000 Millennium European Tour and 1997 Latin American Tour, and with the Kirov Orchestra and the Metropolitan Opera. His solo recording Demsey Plays Wilder includes chamber music and jazz by composer Alec Wilder, and his Centaur CD features music for improvising saxophonist and computer music systems. Member of the American Saxophone Quartet since 1993, he appears on the CDs Spanning the River and The Commission Project, featuring Paquito D'Rivera. He has appeared with such diverse artists as the National Orchestral Association, trumpeter Clark Terry, bassists Milt Hinton and Rufus Reid, pianists James Williams and Jim McNeely, drummers Alan Dawson, Steve Smith and John Riley, and the Nelson Riddle Orchestra.

Dr. Demsey is also an active educator and author. His "Improvisation and Concepts of Virtuosity" is the final essay in the Oxford Companion to Jazz, and he published the transcription book John Coltrane Plays "Giant Steps" (Hal Leonard). He is a Contributing Editor for Saxophone Journal and Jazz Player Magazine, his articles have appeared in Down Beat, Instrumentalist, Jazz Educators Journal, and Journal of Jazz Studies, and he wrote liner notes for five Verve Records compact discs. He is a Selmer Saxophone Clinician and has been a guest lecturer, performer or conductor at over 90 universities, public schools, festivals and music institutes.