Dr. Helena Lukasova is in residence at the Center for New Art at William Paterson University from January 16, 2016 until February 20, 2016. During that time she experiments with a custom application that reads her brain waves as she repeats a childhood rhyme which generates a line drawing. She further processes this line to develop a complex mesh that is realized with the 7 axis robot at the Center for New Art. Dr. Lukasova’s built 4 sculptures, “Objectification of a Thought”, which combine baroque and grotesque tendencies in works that are formally complex and conceptually literate. These works extend her interest in the female body exploring sculpture generated directly from energies of her brain.

She is looking for the intersection of the physical reality and virtual realm. The borderline between these two worlds can create stunning outcomes where fractions of the familiar reality used in strange settings can acquire different connotations. In her work she is also questioning the problem of representation, since the primal idea could be manifested with virtual or physical essence.

For the artist residency in William Paterson University she prepared two project. The first project is dealing with the generative nature of coding using brain activity as a starting point. This data are than transformed into the 3D form through the “translator” specially developed for this project by Jakub Valtar. The “harvested” data of the brain activity for this project are during the repetitive citation of the children rhyme from the childhood.

This artist residency was also made possible thanks to the support of the Lighton International Exchange Program.

Helena Lukasova is a sculptor and digital artist from Czech Republic. She studied at the Academy of Fine Arts and Design Bratislava, Slovakia. After finishing MFA degree she work for years at the Johnson Atelier - Technical Institute of Sculpture, N.J, which was the great place to learn not just about traditional methods of sculpture process such as casting and stone carving but also about 3D scanning, CNC carving. After returning to Czech Republic she returned to school for PhD. studies to investigate in a depth the relation of digital media and sculpture.  At the moment she is teaching 3D modeling, drawing and visual communication at the Faculty of Informatics, Masaryk University, Czech Republic. There she is the head of the Studio of Graphic Design and Multimedia. 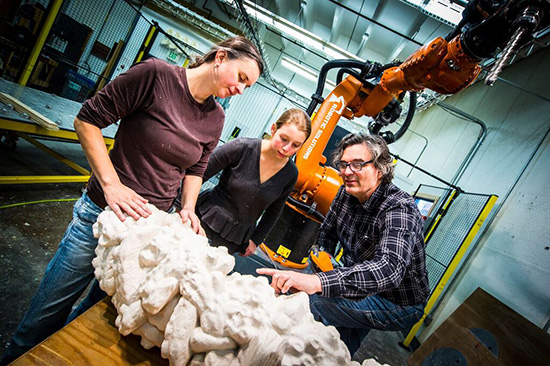 The Center for New Art is a place where art, science and technology converge – a creative hub where artists have access to an unrivaled collection of high-tech equipment to push the boundaries of fine and applied arts. William Paterson University’s Center for New Art is a center for exploration and knowledge creation, where students utilize contemporary tools – from 3D printers to a giant carving robot – to bring their artistic visions to life. With an experimental curriculum focusing on the use of technology in the arts, the Center for New Art is an open forum where students, faculty, colleagues of the University, professional artists and art educators coalesce as makers, thinkers and doers.  Michael Rees, Director of the Center For New Art

The Center for New Art at William Paterson University invites you to see House of FUBB, a physical / Digital Performance Pavilion by Cliff Baldwin, on November 2 2015 - December 2, 2015 at the Power Art Center, 25 Power Avenue, Wayne, Nj 07470. House of Fubb was fabricated using the Robotics Lab at The Center.

On November 12 from 4-6pm Cliff Baldwin will celebrate FUBB with a music performance of The Kepler Music - Songs From the Milky Way. The musical score is transcribed from signals of distant exoplanets and their stars.

The House of FUBB is an astro-viewing pavilion designed for public enjoyment and celestial observation. The artist has invented a custom typeface perfectly suited to large architectural projects. FUBB, the name that the artist has given to Exoplanet 452b is an earthlike planet discovered in the Milky Way in 1995.  It exists 1400 light years away. The language of space and time come together with the House of FUBB.

The Kepler Music - Songs from the Milky Way were written by Baldwin from data describing planet 452b. The Kepler Music will be available for download at https://cliffbaldwin.bandcamp.com/album/the-kepler-music

Cliff Baldwin is a word artist, designer, sculptor and filmmaker. He lives and works in Aquebogue, New York. He has exhibited in Tokyo, Cologne, Berlin, Mexico City, Los Angeles, and New York.  His work is in numerous collections including The Museum of Modern Art, The Walker Art Center, The Museum of The Art Institute of Chicago, The National Gallery of Canada and The Museum of Rhode Island School of Design.

The Center for New Art at William Paterson University is a place for makers, thinkers, and doers to explore the use of technology in the arts. It houses exceptional equipment for robot manufacture, 3d printing, laser cutting and scanning. It also offers a rich program of artist working and researching collaboratively with students.

For more information contact:
Michael Rees, Director the Center for New Art at William Paterson University
Cliff Baldwin, artist of House of Fubb and the Kepler Music - Songs from the Milky Way.

The Center for New Art at William Paterson University

A state-of-the-art, large-scale robot system that combines computer modeling and animation programs with computer-aided manufacturing software to sculpt 3D objects is now being used by students at the Center for New Art in William Paterson University’s College of the Arts and Communication thanks to a $270,100 gift from an anonymous donor.

The seven-axis KUKA Robot is capable of carving in a variety of materials, including foam, wood, and soft metals, allowing for precision sculpting of large-scale forms.  Located in the University’s Power Arts building, the robot is the first of its kind at a college or university in New Jersey. The robot has been dubbed “Blossom” by the first group of University students to use it in their work based on its resemblance to a giant unfolding mechanical flower.

“This new robotic system allows undergraduate and graduate students, faculty, and visiting artists to create 3D objects using the most advanced technology available to artists in our state and beyond,” says Michael Rees, professor of art and director of the Center for New Art.  “Students can use this robot to sculpt and carve works with no limit on their imaginations, allowing them to create figures that are larger than life.”

Students will also gain valuable career-oriented creative and technological skills.  Plans also include collaborations between the Department of Art and University programs in anthropology, environmental science, business, and computer science on projects to use the robot to create three-dimensional objects that enhance student learning. For example, the department has collaborated with anthropology students to create 3D skulls of various hominids.

In addition to funding the purchase of the robot, the anonymous gift will finance color 3D printing equipment and provide enhanced programming for students, including the development of a new course, Eco Techno, that will allow student artists to combine ecology, technology, and 3D design.  The gift will also fund student residencies at Garfagnana Innovazione in Italy in conjunction with the Digital Stone Project, a New Jersey not-for-profit organization that provides opportunities for artists to employ state-of-the-art technology in creating works of art in stone.

“With the addition of the seven-axis robot to our progressive Center for New Art, William Paterson University becomes the positive flashpoint in the state for innovation and advancement in higher education transcending disciplines in the arts, humanities, and the sciences,” says Daryl Moore, dean of the College of the Arts and Communication. “It also provides a fertile environment for industry partnership opportunities in research and development.”

“This generous donation has enabled us to explore new possibilities in artistic creation and further establish the Center for New Art as a leading presence in the emerging art world,” says Rees.  “We are grateful to have a supporter who shares our passion for art at the crossroads of science and technology.”

Rees, who joined the faculty in 2008, has worked with new media in his sculpture since the early 1990s. He is one of the first sculptors in the world to embrace the use of computer-aided design, 3D printing, and automated manufacture and blend it into a conceptual art practice. His works have been included in numerous exhibitions, including the Museum of Art and Design’s exhibition Out of Hand: Materializing the Post Digital. He has won grants from the National Endowment for the Arts and the Rockefeller Foundation.

The Center for New Art is an artistic hub where students, faculty, professional artists and art educators coalesce as makers, thinkers and doers exploring the convergence of art, science and technology.  With an experimental curriculum that seeks to push the boundaries of traditional sculpture, digital media and animation, the Center offers lectures, workshops, practicums, symposia and exhibitions focused on the use of technology in the arts.