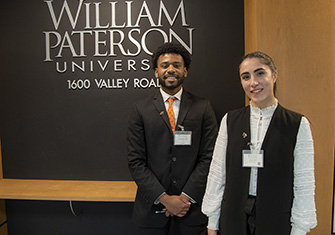 WP's Christopher Hall, a finalist in the sales role play competition, and Sabreen Huzien, who placed second in that contest. 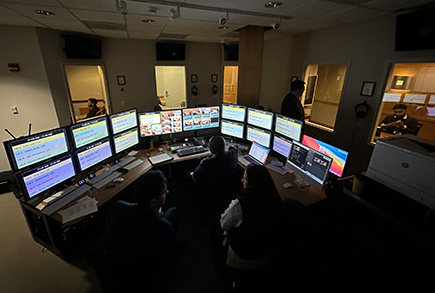 Technicians monitor audio/video feeds from within the sales labs, which allow judges to observe from afar and allow students to produce video reels of their work.

Students from16 universities across the country and Canada put their sales skills to the test during the 15th Annual National Sales Challenge, hosted on campus by the the Russ Berrie Institute for Professional Sales (RBI) in the Cotsakos College of Business from November 16 to 18.

Sabreen Huzien ’23, a William Paterson senior majoring in finance, placed second in the sales role play competition. Huzien made it to the final round based on her scores from two initial rounds of sales role-play competition, each of which required a 15-minute in-person sales call meeting.

The event is designed to encourage excellence in sales skills and offer students an opportunity to develop new soft and tech skills to prepare them for the future of professional selling, as well as demonstrate those skills practically. Participants network with business executives from companies around the country who judge the events and serve as sponsors. It is one of only a few such select competitions in the country. Before the event, students competed on their campuses to win the opportunity to compete in the National Sales Challenge at William Paterson.

During the three-day event, students participated in an intense series of selling competitions and workshops, including a speed selling competition in which they had to sell themselves on why they should get hired for a professional sales role. During the sales role-play competition, student competitors showcased their skills by conducting sales call meetings.

The Russ Berrie Institute for Professional Sales is consistently recognized as one of the top sales programs in the nation by the Sales Education Foundation of Dayton, Ohio. William Paterson is the first higher education institution in the world to offer a bachelor of science degree in professional sales.