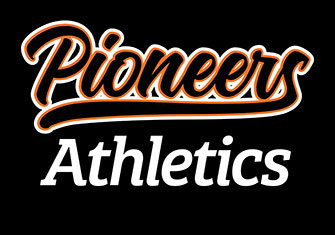 Two longtime assistant coaches on the William Paterson University campus have been promoted to head coaches of their respective teams.

Shaun Williams, a 13-year member of the William Paterson football coaching staff who also spent nine seasons playing in the NFL, has been promoted to the role of head coach of the Pioneers football program.

Former Pioneer student-athlete Matt Heitmann '14, an 11-year member of the WP coaching staff, has been selected head coach of the men’s soccer program. 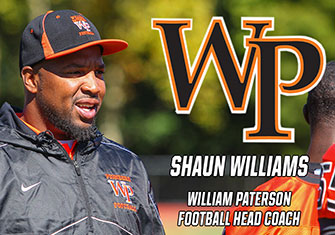 Williams competed for nine years in the NFL (1998-2006), reaching Super Bowl XXXV as a member of the New York Giants, before joining the Pioneer coaching staff in 2009 as a part-time assistant coach. He was elevated to the full-time position of defensive coordinator in 2013 and has fulfilled those responsibilities for the last nine seasons while working with the team's safeties. Williams served as William Paterson's interim head coach this spring after former head coach Dustin Johnson accepted a position on the Villanova University staff.

"I am truly grateful for the opportunity to lead William Paterson University football," Williams says. "I look forward to growing this program and making it the premiere destination for student-athletes to grow personally, academically and athletically,” he adds, noting that his experience here have led him to “understand the challenges and opportunities that we face” and “bleed Black and Orange.”

Williams' positive impact on the William Paterson program was immediate, and his willingness to share his knowledge on and off the field has helped 21 Pioneers earn a total of 33 all-conference awards, including 2010 D3football.com first-team all-American cornerback Leer Biddle.

Williams was selected 24th overall by the New York Giants in the first round of the 1998 NFL Draft, and worked with the nickel defense and special teams units for two years before moving into a starting role from 2000-02, including Super Bowl XXXV in 2001 when the Giants squared off against the Baltimore Ravens. An injury during the 10th game of the 2003 season, followed by another injury suffered during the second game of the 2004 campaign, limited his action for two years before he recovered to play in eight games for the Giants in 2005 and start 12 times for the Carolina Panthers during his final season in the league in 2006. All told, he had 347 tackles, 4.5 sacks, 15 interceptions and three forced fumbles during nine years in the NFL. 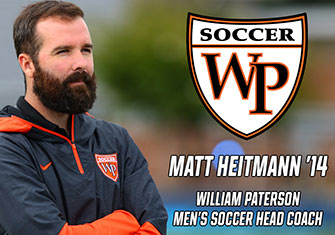 "It is an honor to be given the opportunity to be head coach at a university and program that has given me so much joy in life," Heitmann says. "I would like to thank Coach Woods for all his wisdom and guidance over the years. I am excited to continue the tradition of leading a program that focuses on the success of its student-athletes while competing for championships."

Heitmann (2007-2010) was a standout in the Pioneer defensive third, earning selections to the 2010 All-New Jersey Athletic Conference (NJAC) First Team and National Soccer Coaches Association of America (NSCAA) South Atlantic All-Region Third Team, the 2009 All-NJAC Second Team and the 2008 All-NJAC Honorable Mention. A starter in 17 of 19 matches as a senior, the back had one goal and an assist, including the tying goal for his first career score in a 2-1 win at Kean. The 2008 ECAC Metro Region Tournament Most Outstanding Player, he had a goal and two assists while starting 73 of 77 career matches and helped lead WP to the second round of the 2010 NCAA Tournament.