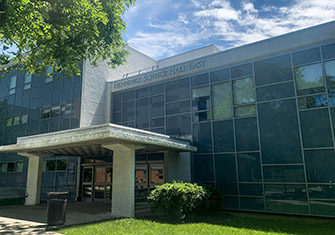 William Paterson University renamed the former Science Hall East academic building on campus in honor of Dr. Dorothy Grant Hennings and her late husband, Dr. George Hennings, during a dedication ceremony held on Thursday, May 26 in recognition of a transformative and extraordinary philanthropic commitment.

Dr. Dorothy Grant Hennings is the sister of the late Dr. Barbara Moll Grant ’54, an alumna and professor emerita of education. After the death of her sister in 2019, Dr. Hennings developed a personal relationship with William Paterson University and established the Dorothy and George Hennings Endowed Scholarship at the University.

“Thanks to the special bond of family and shared values and purpose centered on higher education, William Paterson is the fortunate and very grateful recipient of a transformative gift on behalf of Dorothy and George,” said President Richard Helldobler.

The gift will provide additional support to the Dorothy and George Hennings Endowed Scholarship and for the already established Barbara M. Grant Endowed Scholarship. It will also provide support for student research in the science disciplines in the University’s College of Science and Health.

The gift creates an endowed fund in Dorothy and George Hennings’ name to support strategic initiatives of the University. “Such funds will assist William Paterson in making bold, transformative moves on behalf of student success through innovative new programs,” said President Helldobler.

“Through this very generous and transformative gift, students at William Paterson University in the science disciplines will benefit from scholarship support and research support that will assist them in attaining their dreams of a college education, as well as funds in support of innovative programs across the University,” said Michael Seeve, chair of the University’s Board of Trustees. “We are so grateful to Dr. Dorothy Grant Hennings and her late husband Dr. George Hennings for their very generous support for William Paterson University and its students.”

Dr. Grant Hennings spoke of her late husband in her remarks, “Ode to George: A Love Poem,” in which she reminisced about their life together as they traveled the world and paid tribute to her “Renaissance man,” a scientist who also studied literature, art, and music. The couple, who were married for 48 years, until George’s death in 2016, had no children, and, as Dr. Grant Hennings noted, no heirs to carry on his name. Dr. Dorothy Grant Hennings addresses the crowd during a ribbon-cutting ceremony on May 26, 2022

“Today my George, we give you this, your surname in letters bold and tall: Hennings Hall,” she said. “No one will ever forget my Renaissance man, his name now engraved upon the wall of this fantastic science hall…What a wonderful day this is for George, for me, for this great school, William Paterson University. Thank you for sharing this day with me, with my George.”

The building, to be known as Hennings Science Hall East, was renovated in 2012 as part of a significant expansion and renovation of the University’s Science Complex. Hennings Science Hall East features computer labs, teaching labs for introductory courses, research labs, a psychology clinical training suite, a microscopy suite, an animal research facility, a greenhouse, the Science Enrichment Center, a mathematics learning center, and the offices of the dean of the College of Science and Health.

Dr. Dorothy Grant Hennings is distinguished professor emerita at Kean University, where she was a professor of education from 1965 to 2002 and was instrumental in developing programs that transformed the institution from a teacher education college to a multipurpose university. She taught undergraduate and graduate courses in language arts and reading education and was founder and editor of School Connections, the official journal of the Kean College of Education that today is a nationally recognized, juried periodical. Dr. Grant Hennings authored 50 textbooks and guides for teachers and children with prominent publishers such as Houghton Mifflin, Prentice Hall, and HarperRow. She received the Outstanding Teacher Educator in Reading Award from the International Reading Association in 1992 and the Distinguished Service Award from the New Jersey Reading Association in 1993. She was also named both Teacher of the Year and Presidential Scholar of the Year during her tenure at Kean. Dr. George Hennings, who died in 2016, was a professor emeritus of biology at Kean University, where he was instrumental in developing the university's program in secondary school science education and established courses in geology and astronomy as the university expanded its curriculum. Dr. Hennings was a charter member of the Kean’s faculty senate and served on numerous committees, including the promotion committee. He was a life member of the American Association for the Advancement of Science and of The National Science Teachers Association. Together with his wife, he co-authored two books: Keep Earth Clean, Blue and Green (Scholastic Press) and Today's Elementary Social Studies (Harper and Row). Hennings Hall, the four-story building that is home to the Kean College of Education, was dedicated in honor of the couple in 2005; in 2013, they received Kean's inaugural William Livingston Award for their service to education and their contribution to the university.

Dr. Barbara Moll Grant ’54, who died in 2019, was the sister of Dr. Dorothy Grant Hennings. A member of the William Paterson University faculty from 1963 until her retirement in 1998, she coauthored two books with her sister Dr. Dorothy Grant Hennings: The Teacher Moves, published by Teachers College Press, and Content and Craft: Written Expression in the Elementary School, published by Prentice Hall. Upon her retirement, Dr. Grant was awarded the title of professor emerita. She continued to be closely involved with the University, establishing the Barbara M. Grant Scholarship in 2005. In 2021, William Paterson renamed the former Preakness Hall academic building on campus Barbara Moll Grant Hall in recognition of her generous philanthropic support of her alma mater.

“Thank you for believing in and investing in William Paterson and our students,” said President Helldobler. “Your support is truly an investment in New Jersey’s future. I know that as someone who was born here and dedicated your life to making it a better place, you know full well the power and the potential of this region, its universities, and its people.”