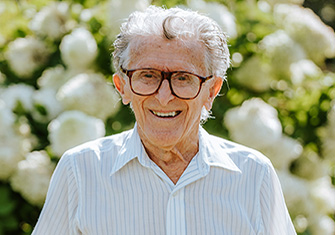 “Hardly a day goes by without a call from a student,” says Gabe Vitalone, William Paterson University professor emeritus of education.

A beloved teacher, mentor, and friend to many in the William Paterson community, Vitalone will celebrate his 100th birthday on May 31, 2022. A loyal group of his students, former colleagues, and friends, known as “Gabe’s guys,” still gathers together to meet him at the local Wayne Hills Diner.

“I celebrate each day,” he says. “I’ve been lucky with my physical health.”

And it’s a gratifying life, he reflects, filled with so many people including Evelyn, his wife of 67 years, three children, two grandchildren, and numerous friends.

Vitalone spent 34 years teaching and coaching at William Paterson, starting in 1957 as a professor of health and physical education. He was coach for the baseball, basketball, and later on, cross country teams. In 1962, after completing his doctorate, he went on to teach developmental psychology on campus.

Throughout his life, he never slowed down. At 95 he starred in the YouTube video, “Keep Moving: It’s Never Too Late,” featuring him running and doing his morning exercise routine. And in 2015, he self-published a collection of poems he had written over the years. It includes one of his earliest poems to his wife, Evelyn, written in 1952.

At 98, he enjoyed the thrill of singing “The Star-Spangled Banner” at Yankee Stadium. Vitalone, a lifelong Yankees fan and World War II veteran, had long dreamed of singing the song to honor his boyhood pal, Joe Romano, who was killed during the war. The performance was postponed from April 2020 to September 2020 due to COVID-19, when the Yankees arranged a video rendition for the players and coaches in attendance. At-home viewers saw the broadcast before the team’s afternoon game against the Baltimore Orioles.

What sage advice does this remarkable centenarian offer? “I’ve come to the conclusion that everyone we meet becomes a part of our life. Even in the small, transient encounters…every person affects us in some way.”

As a teacher, what you say in front of the classroom isn’t the only thing that matters, he adds. “Cherish the brief, treasured talks before and after class, or in chance meetings with students on campus.That is what they remember.”