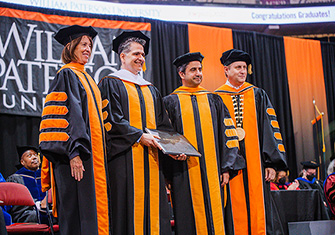 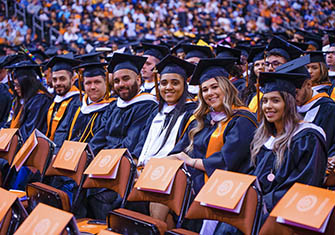 Businessman, civic leader, and television host Carlos A. Medina discussed the importance of familia, or family, as he encouraged the Class of 2022 to give back and become engaged with their communities during his keynote address at William Paterson University’s 2022 undergraduate commencement ceremony on May 18 in the Prudential Center in Newark. The event, which drew more than 10,000 family and friends, was the University’s first large, in-person ceremony celebrating bachelor’s degrees candidates since 2019 due to the COVID-19 pandemic.

“As you move forward in your life and careers, never feel as if a leap or risk in your journey in the service of others is done so alone,” Medina said, pointing to the network of support the graduates can rely on. “You have a wonderful, diverse familia right here at William Paterson: your classmates and the kindhearted, brilliant professors, administrators, and staff of this great school.”

Medina, the president and CEO of the Statewide Hispanic Chamber of Commerce of New Jersey, told the graduates that his father, a Cuban immigrant who came to the U.S. with $5 in his pocket, worked multiple jobs while studying to get his degree. He added that his father taught him the importance of a network made up of positive engagement and focused on helping and aiding others without the expectation of renumeration or reward.

“My father, who is my role model and teacher, helped me to define what is ‘familia’ and how it would play a key role in my life,” he explained. “My message to you, as members of our future generation of leaders, is this: Don’t let fear or uncertainly hold you back from doing what’s right, from doing good in the service to others.”

Medina, who is also a founder and president of the Hispanic Chamber Fund, the president of Robinson Aerial, and the producer and host of the PBS and New Jersey PBS program, Que Pasa New Jersey, was awarded an honorary doctor of humane letters degree in recognition of “his achievements as an entrepreneur, his advocacy for and commitment to growing the Hispanic business community in the State of New Jersey, and his dedication to serving the community at large.”

In his address at the ceremony, University President Richard J. Helldobler encouraged the graduates to consider their new responsibilities in a time of political, racial, and economic polarization.

“You have all learned—and many of you have lived—on one of the most diverse university campuses in New Jersey. It is my hope that you have also learned to appreciate and respect those who look, think, or love differently than yourself,” he said. “And it is my hope that you have learned how to engage with those who look, think, and love differently from yourself. Finally, it is my hope—and I would argue it is your responsibility—that as you move out into the world and into your cities, towns, and neighborhoods, that you will use those skills to help promote a better understanding and appreciation of ‘otherness’ as a means of building true community.”

Also among the Class of 2022 were eight adult completion students who returned to college and earned bachelor’s degrees in health studies or communication, and three graduates of the University’s new fully online bachelor’s degree in leadership and professional studies, a program specifically designed for adult students.