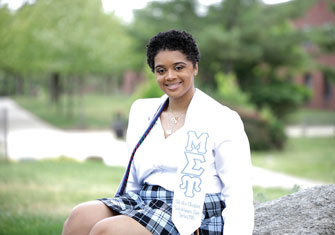 The moment that Kimberly Pena ‘21 was offered the chance to return to William Paterson through AmeriCorps to assist the Office of Campus Activities, Service, and Leadership (CASL) as a full-time employee, she knew it was the perfect opportunity to give back to the institution that supported her through one of the most difficult times of her life.

During her senior year at WP, Pena was diagnosed with a rare cerebrospinal fluid leak (CSF) after falling ill her first night patrolling the residence hall where she was stationed as a resident assistant. Spontaneous CSF leaks typically only occur in five out of 100,000 people each year, mostly affecting those in their 30s and 40s.

Shortly after being brought Hackensack Meridian Hospital where she received her diagnosis, what was supposed to be one surgery to treat her condition quickly turned into five.

“It was like a Grey’s Anatomy season. They did procedures that they said they had never done before,” says Pena, who serves in her current role at WP until August 2022. “I’m thankful for the support that I was given by my family and medical team.”

After the successful round of surgeries at Morristown Medical Center in early to mid-September 2020, Pena was transferred to Robert Wood johnson Hospital in New Brunswick where she had to undergo speech therapy to regain her ability to talk and re-learn how to walk.

By January 2021 she was back attending classes and was able to graduate in August 2021, just a few short months after her initial expected graduation date, with a bachelor’s degree in sport management.

“Kimberly embodies Will. Power. through her resilience and ability to persevere through life’s day-to-day challenges, approaching every day as an opportunity to care, serve, and lead with heart,” says Maribel Rodriguez, former associate director of CASL and mentor to Pena. “She proactively strives to achieve her goals and inspires her peers and William Paterson students to live their dreams. She is Will. Power.”

The day after receiving her degree, Pena was offered a one-year position to serve as the 2021-22 WP AmeriCorps Changebuilder coordinator with CASL.

“It was the perfect way to apply the things that I learned during my time at WP while remaining in such a supportive environment,” says Pena, adding that William Paterson has had a profound impact on her both academically and culturally.

Pena was initially filled with uncertainty after completing her recovery, unsure of her post-graduate future and feeling a bit stigmatized after experiencing such a rare and incapacitating injury, as well as an arduous recovery process.

“A part of me was worried about how much I had to prove myself after everything that happened because of the repertoire I had already built, and another part of me felt like I should not be limiting myself or doubting all the potential I hold,” says Pena. “Being offered this position made me feel like something was still seen in me and helped me apply all that I had worked on, not only as an undergraduate student, but also as someone who is still recovering from such a rare case.”

In her role as Changebuilder coordinator, Pena oversees the operations for the WP Pioneer Pantry, creates civic engagement events and presentations for the campus community, and actively recruits students to participate in the WP Changebuilder Project, a program that encourages students to engage with social issues that help create and promote solutions via service opportunities, educational workshops, and experiential learning.

“Programming these events has taught me to allow students to bring ideas to the table, give insight based on their questions and guide them to their goal. Being able to work with student leaders allows me to pass down all the knowledge that was given to me when I was an undergraduate student,” says Pena.

It is the sum of these experiences that she credits as aiding her professional development and preparing her for life after her AmeriCorps term ends.

“The faculty and staff at WP have helped me grow as a person and notice features in myself that I don’t know if I would have realized on my own,” says Pena. “They have been there to see me grow from a first-generation college student who lived with self-doubt while trying to navigate a ship I have never been on, to being a college graduate who has defied all the odds presented and now understands the greatness I can achieve.”