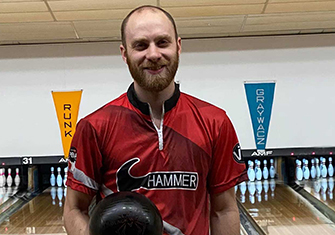 No. 2 seed Runk would have to win two matches to advance to the finals, which take place on January 29. The champion wins a $100,000 prize.

When he bowled as an undergraduate on William Paterson’s team, Runk qualified for the Intercollegiate Singles Championships in 2016; he was also part of WP’s 2016-2017 and 2017-2018 teams which finished top five at the intercollegiate team championships both years and won back-to-back club national championships.

Runk, who earned a degree in Sports Management from WP, works fulltime and has been bowling part-time on the PBA Tour.

“I am so proud of Brandon, as is our entire WP bowling family,” said William Paterson Bowling Team Coach Greg Hatzisavvas. “Proud coach moment,” he adds.