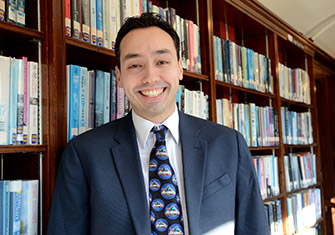 Nicholas Hirshon, PhD, a William Paterson University assistant professor of communication, has received the 2021 David L. Eshelman Outstanding Campus Adviser Award, presented by the Society of Professional Journalists (SPJ). This is the second time Dr. Hirshon has won the award since 2019, making him the first two-time winner in its 43-year history of the award.

SPJ’s Outstanding Campus Chapter Adviser Award, initiated in 1978, is presented annually to an individual who has made an exceptional contribution to the chapter for which he or she serves as SPJ adviser. Hirshon serves as adviser to the University’s chapter, which he and 11 students founded in fall 2017.

"When I accepted this award for the first time in 2019, I said that it was the honor of my career. I never expected I’d be so honored again, and as a journalism historian, I’m especially humbled that the Society of Professional Journalists considered me worthy of becoming the first two-time winner in the 43-year history of this award,” says Hirshon. “I founded the campus chapter at William Paterson to show students that for all the challenges facing journalists today, there is still a lot to love about our profession. SPJ is one of those beacons that brings together so many brave people committed to fact-finding and truth-telling, talented people who’ve chosen to apply their skills to this public service.”

The William Paterson SPJ chapter hosted more than a dozen events during the 2020-21 academic year, including workshops, fundraising initiatives, and discussions on a variety of journalism topics. Hirshon moderated a nine-part discussion series in which journalists participated in virtual Q & As with WP students.

A member of the William Paterson faculty since 2016, Hirshon received the 2019 New Jersey Journalism Educator Award from the Society of Professional Journalists. He is the author of We Want Fish Sticks: The Bizarre and Infamous Rebranding of the New York Islanders (University of Nebraska Press, 2018), and serves as the associate editor for the academic journal American Journalism. Previously, he was a reporter at the New York Daily News from 2005 to 2011, covering breaking and community news.

The Society of Professional Journalists is the nation’s most broad-based journalism organization dedicated to encouraging the free practice of journalism and stimulating high standards of ethical behavior.