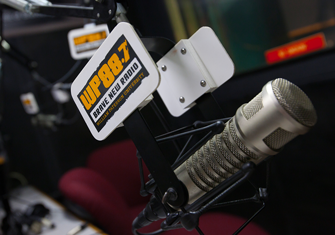 William Paterson University’s student-run radio station, WPSC-FM (88.7), has been nominated for the 2021 Marconi Award for “College Station of the Year.” The prestigious Marconi Awards are presented by the National Association of Broadcasters to recognize outstanding achievement by radio stations and individuals. WP 88.7 FM is one of five finalists selected in this category.

The 2021 NAB Marconi Radio Awards, often dubbed “the Oscars of radio,” will be presented on October 13 at the Westgate Las Vegas Resort & Casino during the 2021 Radio Show, the industry’s premier annual conference.

“This is an incredibly proud moment for us at Brave New Radio. For the NAB to consider us as at least a finalist for the College Radio Station of the Year in four of the past six years is no easy feat and certainly something we do not take for granted,” says Sebastian Escobar, general manager of WPSC-FM. “After the pandemic shut us down a bit, we continued to stay on the air with the commitment of our passionate students and staff, relaying important health information to our community. The work that our students willingly put in is astounding.”

On World Radio Day 2020, WPSC-FM became the first radio station to ever produce a live broadcast from the Marconi Museum in Bologna, Italy, the home where wireless radio was invented.

This is WPSC-FM’s fourth Marconi Award nomination; the station won the award for “Noncommercial Radio Station of the Year” in 2018, a category that included other college and NPR-affiliated stations. WP 88.7 FM hopes to add another award to an impressive list of accolades that include being named Best Radio Station in the Nation (among institutions with more than 10,000 students) by the Intercollegiate Broadcasting System (IBS) four times since 2012.