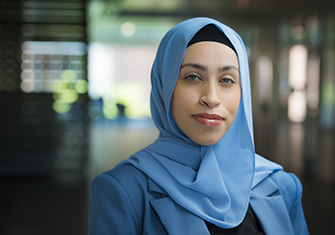 Legal studies and political science major Huda Qasem ’21 conducted research for her thesis in the Honors humanities track on “How Islamophobia is Portrayed on Television.” Working with her thesis advisor, Professor K. Molly O’Donnell, Qasem focused her study on how Muslim characters are portrayed on popular shows on Netflix and Hulu, including Law and Order: SVU, Grey’s Anatomy, Criminal Minds, Elite, Ramy, and 911 Lone Star.

“My research examines the longstanding problem on television of stereotyping Muslim characters, which pervades television today. Islamophobia varies through each show and movie in my study, whether casting a male Muslim as a terrorist or disrespecting and sexualizing the hijab. Each show that I examine misrepresents Muslim and Middle Eastern communities and misinforms the audiences about those communities,” says Qasem, who is also completing a minor in criminal justice.

Qasem concluded that although television now has more Muslim characters than ever, there are also more inaccuracies with more inclusion, since writers, directors, and actors from non-Muslim backgrounds are making these shows. This misinformation spreads the stereotype that Islam promotes terrorism and that the people who follow the religion are dangerous.

“This topic was interesting to me because I am a Muslim and Middle Eastern woman, so when I see how I am being misrepresented on television, it made me realize that when people from other religious and cultural backgrounds see me, they will assume the worst of me because of how I'm being represented. Through this project, I hope to get my message across that Muslim and Middle Eastern people are not what the directors on television have made us out to be, as well as teach people a few things about my religion and culture, since there is a large population of people who are not aware of what our true customs and religious beliefs are,” says Qasem.

In particular, she is thankful to Professor O’Donnell, who not only guided her throughout the project but also encouraged her to speak out about Islamophobia. “Dr. O'Donnell inspired me to pursue this topic once she saw how passionate I was about it,” she says. “Throughout the process she helped me organize my research and encouraged me to not only emphasize the facts, but to also express my opinion. Dr. O'Donnell taught me that sometimes the facts are not as loud as your voice and to always utilize your voice whenever you are given the chance.”

“William Paterson University has prepared me for the future by providing me with the resources and education I needed in order to excel in the career I am pursuing,” she says. Qasem plans to attend law school in the future.