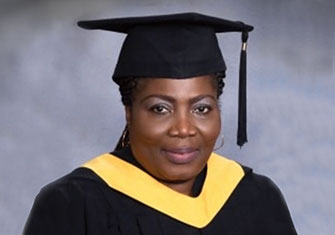 Sylvia Anthony Tewiah, William Paterson University Class of 2021, has grit. Lots of it.

A disabled, divorced mother with two grown sons and a teenage daughter, who had two careers under her belt that she had to leave for medical reasons, Tewiah is resolutely headed towards a third career as the soon-to-be first graduate of the University’s two-year-old Adult Degree Completion Program. She will walk across the Commencement stage this May, with the aid of her cane, as the proud recipient of a bachelor’s degree in health studies and a minor in psychology.

In 2012, Tewiah went tumbling down a staircase. She broke her hip and needed multiple surgeries. She ended up in a nursing home, in a wheelchair, and was forced to retire well ahead of schedule from an 18-year career as a group home manager due to her physical disability and subsequent health issues. She simultaneously went through a divorce and found herself a single mother to two teenage boys and a six-year old girl. She tried becoming a lunch aide in the public school system but found the job to be too physically taxing. She said that she drained her 401K to put her children through college, and often didn’t have enough money left to put food on the table.

“It was a lot of sacrifice and determination, and me telling them that we could do it,” Tewiah says. “’There is no other way for us than willpower,’” she often told her children.

And with that, she decided to make an investment in herself to better the whole family’s future, at none other than a University whose motto is “Will. Power.”

In 2019, through William Paterson University’s School of Continuing and Professional Education, Tewiah earned her certification as a medical assistant and quickly landed a job. However, not long after, Tewiah found all of the requisite and repeated standing up and walking back and forth with her cane to be too much to handle. She sadly had to leave her new career, as well.

She didn’t stop trying, though.

“I was researching jobs online that I thought I could do, and ones that I really cared about, and I realized that I was going to need a bachelor’s degree,” says Tewiah, who holds an associate’s degree from Essex County College.

She subsequently came right back to WP as soon as she heard about its brand new Adult Degree Completion Program in health studies. The program is tailored to help working professionals, parents and caregivers earn their bachelor’s degrees in high-demand fields, with fast-track, flexible schedules that include online and optional in-person classes. Prospective students must have previously completed at least 60 college credits in order to apply.

“I really want to be a counselor for inner city kids who are struggling through domestic violence,” says Tewiah, who lives in Orange, New Jersey. “I want to help children going through what my children went through,” she adds, explaining that she is a survivor of domestic abuse herself.

Despite the challenges, with much credit both to Tewiah and her sons, they both graduated college. Her eldest son went on to law school and is currently a practicing attorney, and her youngest son just earned his bachelor’s degree and is working to save up money for a doctorate degree in physical therapy. Her daughter will be starting high school in the fall with plans to become a doctor. Tewiah’s youngest children want to pursue careers in the medical field because they have been inspired by their mother’s physical challenges, Tewiah explains, getting choked up.

When asked if her children are proud of their mother, on the precipice of her own university graduation, Tewiah responds with a full heart.

“To be honest, I didn’t do this all by myself,” she continues, discussing the one-on-one support she found both in the School of Continuing and Professional Education and the University’s department of public health. “Everybody helped me, everyone. No one gave up on me. I couldn’t have done it without them. I was in so much pain; sitting in a two-hour class was very painful for me, but I had the support. There was no question I would ask that the staff and professors were not willing to answer. They made sure I understood and they followed through and followed up with all my questions.”

Tewiah’s grit was just as meaningful to the staff and professors she met.

“I would go visit the classrooms and talk to students about exams and schedules. All of the other students would be so nervous about testing, and Sylvia’s response was always, ‘I’m ready.’ She was just so positive about everything,” explains Johanna Prado, previous assistant director of the University’s professional certification programs and current director of its Adult Degree Completion Program. “Sylvia is so wonderful and inspirational and I am so happy for her that she is graduating.”

“Working with Sylvia has been fulfilling and inspiring,” echoes public health professor and chairperson Corey Basch. “From the day I met her, it was obvious that she was determined to complete her degree, and I am grateful to have had the chance to share in this journey with her.”

Tewiah’s message to other adult students: “If you have the determination to do it, if you have a reason—just hold onto that reason as hope. It’s not easy. But I got so much support at William Paterson. You can get support. None of my professors knew my story; they were just that willing to help me attain a degree.”