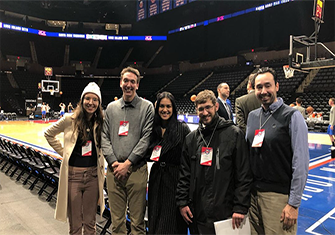 William Paterson University’s student chapter of the Society of Professional Journalists (SPJ) has been named National Campus Chapter of the Year for 2020.

William Paterson beat out 95 chapters across the United States, including those at universities more than triple the size, and dethroned the renowned chapter at Ohio University's E.W. Scripps School of Journalism, which had been named National Campus Chapter for four straight years.

SPJ, which is comprised of over 7,000 members nationwide, cited 18 programs and projects run by the William Paterson chapter during the 2019-2020 academic year in announcing its choice for National Campus Chapter. These programs included a discussion series and post-discussion dinner with journalists from a range of news media outlets, trips to shadow a theater critic while she reviewed a stage performance and a professional basketball announcer during a game at Nassau Veterans Memorial Coliseum, and on-campus workshops on interviewing and fact-checking.

Nicholas Hirshon, an assistant professor of communication, founded the WPSPJ chapter in the fall of 2017 to strengthen the University’s journalism culture and has served as its adviser since. In just three years, with a national accolade for the chapter already under his belt, it appears he’s succeeding.

"Dr. Hirshon has been instrumental in demonstrating to our young men and women the importance of high-quality journalism at a particularly difficult time in our country,” says Loretta McLaughlin Vignier, interim dean of the University’s College of the Arts and Communication. “There continues to be a need for journalistic excellence especially when the value of the fourth estate is being questioned and economically undercut. Journalism continues to be a viable and noble career."

“Journalism is critical in keeping the public apprised of what's happening in their communities and helping them make informed decisions about how to live their lives,” continues Hirshon, a former reporter for the New York Daily News, who previously won SPJ’s 2019 David L. Eshelman Outstanding Campus Adviser Award for his work with the William Paterson chapter.

“Throughout the pandemic, journalists have gone out every day to bring us the latest news about lockdowns and treatments and vaccines, often risking their own health to do so. I'm so grateful for them, and to be able to work with the next generation of journalists at William Paterson,” Hirshon adds.

That next generation is definitely thankful.

“My involvement in this group has affected me academically by building my knowledge of what really happens in the real world,” says 2020-2021 WPSPJ president John Conlow ’21, a communication major. He cites attending a news conference after a pro hockey game and a tour of the New York City offices of the investigative news outlet ProPublica as particularly influential WPSPJ events that showed him how much work, stress, and fun are involved in being a journalist.

“Being president of a group now recognized on a national level is amazing,” he adds.