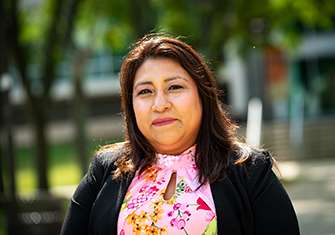 Josefina Soperanes ’21 immigrated to the United States at the age of 19. She dreamed of going to college, but one big roadblock stood in her way: She did not speak English.

“So, I had to learn,” Soperanes, now 36, says matter-of-factly. “I commuted from my home in Pompton Lakes to Paterson to go to an institute to learn how to speak English. I didn’t drive, so I had to take the bus, and every day from Monday to Friday, I passed by William Paterson University on that bus. I always said: ‘One day I am going to be there.’”

The married mother of two, who has a fulltime career, is on track to graduate from William Paterson in 2021 with a bachelor’s degree, Dean’s List standing, and double major in secondary education and Spanish language and culture, with an ESL endorsement in teaching and a linguistics minor, too. She is the first in her family to go to college, and will subsequently be the first to earn a college degree.

“I was so afraid when I got here, but all of my professors at William Paterson have been amazing. They have been angels for me. I didn’t have anybody to ask in my family at all when it came to education. But the professors took time to talk to me, to tell me I’m not the only one going through this, to say ‘We’re going to support you,’ and they were awesome,” Soperanes says.

“They answered my emails, helped if I had a hard time on a paper…I didn’t expect to find that at a university. I’d see Hollywood movies where you are one of 100 students in a classroom, but here, the classes are small and the professors can hear your ideas and they talk to you one-on-one.”

Before getting to WP, Soperanes pursued all of the requisite training to secure a career in the beauty industry—as a massage therapist, manicurist, and esthetician. It’s not her dream career, but she thought it’d provide a good opportunity to build her skills in English until she found a dream career. She eventually enrolled in Passaic County Community College, graduated with her associate’s degree, and in 2019, headed to the WP campus she’d adored from afar for so many years.

Was it easy? No. Soperanes says she was outright “terrified” in her first education class because she didn’t think her writing skills in English were strong enough. But she asked her professor for help, spent one-on-one time after class mapping the direction for a research paper, and therein found the outside inspiration that fueled her internal grit to move forward.

“William Paterson for me has been everything. The support, empathy, care; they really care here—the professors, the staff, even the people who serve you lunch. I love the library and all the resources they have for students…At William Paterson, they give you the resources, the tools, the steps, everything to succeed,” Soperanes says.

“It’s so hard,” Soperanes says. “It’s hard with my kids and with work and all of my responsibilities, but to have this support and compassion: You can’t replace it. It’s kept me going. It’s made me think, ‘It’s not that hard.’ I can do this.”

After graduation, Soperanes hopes to work professionally as an ESL teacher for the immigrant community, and especially loves the idea of teaching adults who are walking the same road she once walked. She has already racked up a great deal of experience. She served for five years as a volunteer ESL teacher for adults through programming in her church, one year as a tutor in the Bridge program at Passaic County Community College, and the past year as a substitute Spanish teacher.