WP Music Students to Perform Their New Compositions Focused on Social Justice During Outdoor Concert on Campus on Friday, September 25 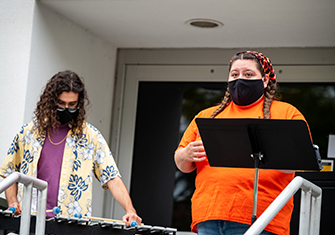 Students rehearse outside the Shea Center for Performing Arts on Thursday, September 24. 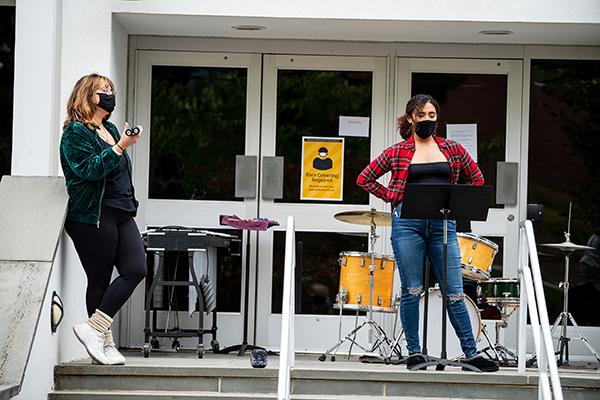 William Paterson University vocal and percussion students are set to premiere new compositions they wrote as part of a student musical collaboration project focused on social justice. They will perform the new works during an outdoor concert in front of Shea Center on campus on Friday, September 25 at 5 p.m.

Their project, titled It Will Be True, was inspired by the calls for social justice after the killing of George Floyd. Led by professors in the department of music—Lauren Fowler-Calisto, Christopher Herbert, and Payton MacDonald—the students have composed new works using texts by American poets, political leaders, and public figures that explore themes of diversity, human dignity, equity, and fairness.

Fowler-Calisto says the three faculty began planning the project last spring as they explored ways to be creative in light of the pandemic while providing both vocal and percussion students with an opportunity to “explore new ideas and unfamiliar areas,” and develop skills in composition and improvisation. “The majority of these students have never composed before, so the fact that they are creating new music is really exciting,” she adds.

As demonstrations for social justice then grew across the country, the professors saw the project as a way “for our students to meet this historic moment in a creative way,” says Herbert.

The music professors reached out to faculty and staff in a number of departments across the campus, including Diana Peck, professor of communication. “As a professor who teaches about media, I know the power of television and film to influence our understanding of history and the representation of groups of people,” she says. “Professor Herbert’s invitation to suggest some quotes struck a deep chord for me.”

In choosing some texts to suggest for this project, Peck says she wanted to acknowledge “we have another very deep wound in what our nation-building has inflicted on Native Americans.” She subsequently reached out to a tribal member, who helped her identify quotes from a speech by Black Elk, a holy man of the Oglala Sioux, and Oren Lyons, a Faithkeeper of the Onandaga Nation.

Students were arranged in groups of three or four, with at least one percussionist, and assigned to write a composition based on one of the texts. They were also provided with ground basses—short, recurring musical themes that serve as a principal structural element for a composition—from a variety of Renaissance and Baroque composers, which were then modernized by students in the sound engineering program. The student groups were free to choose how to use the texts and compose the melody lines.

“Some of the pieces are soulful, some are classical, and some are experimental,” MacDonald says. He points to the fact that many of the music students are in bands or make music beyond the University, and that is was “exciting to see them bring that outside world onto the campus.”

Isabelle Thomas, a sophomore majoring in music education with a focus on classical percussion, along with her group members Anna Petrillo and Janais Martinez, was assigned a speech by Chanel Miller, who was sexually assaulted at Stanford University. “Listening her recall the event was very difficult,” she says.

“In her speech, she says ‘I am with you,’ so we decided to focus on that, and wrote a work called ‘Moving On.’”

The trio collaborated on Zoom to write their piece. “As three women, two of whom are women of color, it was a really wonderful experience to write music together and get to know each other better and talk about the difficult times we are in,” Thomas says. “I am so thankful to be part of such a beautiful and supportive program that lifts us up and allows us to express ourselves. I really learned a lot.”

In addition to Peck, texts were provided by Danielle Wallace, Community and Social Justice Studies; Sean Molloy, Brian O’Broin and Liane Robertson, English; and Theresa Bivaletz, campus victim services coordinator. Texts include “Theme for English B” by the poet Langston Hughes, from which the title for the project was drawn; President Barack Obama’s Second Inaugural Address; “Give Your Daughters Interesting Names” by the poet Assetou Xango; “The New Colossus” by poet Emma Lazarus; and “A Litany for Survival” by poet Audre Lorde.

“From my perspective as a vocal area coordinator, I have been very impressed with the students' range of creativity and collaborative spirit, given the challenges that COVID-19 poses,” says Herbert. “They are stepping well outside their comfort zones on this project, and they are all growing as a result.”