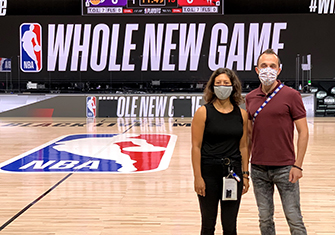 William Paterson University alumni Anthony Lalumia ’07 and Caroline Sanchez ’13 traditionally spend their respective springs and summers providing audio support to some of the entertainment industry’s biggest attractions. But with the global pandemic bringing all large-scale events to a halt, the duo, like millions around the country, found employment scarce. Their return to work seemed uncertain until they were each contacted by Firehouse Productions, on behalf of the National Basketball Association (NBA), with a unique proposal – to produce audio effects for one of the world’s most recognizable brands inside the “bubble” for three months.

“This had never been done before,” commented Lalumia, an atmospheric engineer who has prior experience working on Jesus Christ Superstar: Live in Concert and The Harry Show. “The opportunity to create an arena atmosphere for the players and viewers was a welcome experience for us freelancers who hadn’t worked in months.”

The decision to relocate to the ESPN Wide World of Sports in Orlando, Fla., however, was not made without careful consideration. “When I received the call to work in the bubble, Florida was quickly becoming the epicenter for the pandemic,” shares Sanchez, who works as a system tech and counts the Grammy Awards and the Latin Grammys among her annual production credits. “But after many calls and with the assurance of safety protocols, I felt comfortable in my decision to be a part of this once-in-a-lifetime experiment.”

Upon arrival, Lalumia and Sanchez joined a team of some 40 other professionals and began building a game-like environment without the added benefit of 18,000 fans. And with just over a month to go in the bubble, it’s safe to say that the NBA’s $150 million gamble has paid off, in large part because of the creativity of the audio team and execution of their vision.

Lalumia and Sanchez, who both graduated with a Bachelor of Music degree in sound engineering arts, credit their time at William Paterson and the guidance of Professor David Kerzner in the music department for preparing them for moments like this.

“Aside from the proximity to a major metropolitan area and the courses, the networking and alumni connections made through the William Paterson experience were invaluable,” says Lalumia. “Professor Kerzner not only taught us the business, but he instilled life lessons as well. He is really great at getting the best out of people.”

Sanchez continues to connect with current students, both as a part-time employee for the University’s IT department and by encouraging them to become involved with organizations like “Women’s Audio Mission,” which focuses on the minority women in the industry. “I chose to give them my time because I remember alumni doing the same for me,” says Sanchez. “Anthony and I are just passing the torch.”