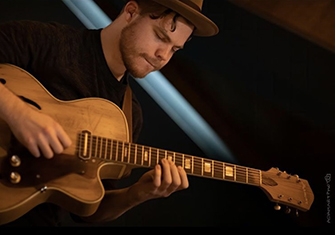 Wes Whitelock is set to graduate from William Paterson University this May with a bachelor of music degree in jazz studies. One month before he officially enters “the real world,” he’s already notched a huge professional accomplishment: Whitelock performed in Jazz at Lincoln Center’s 2020 virtual gala, “Worldwide Concert for Our Culture.”

Whitelock plays guitar in the concert’s first selection with the Lincoln Center Jazz Orchestra. Legendary jazz trumpeter and composter Wynton Marsalis—artistic director of Jazz at Lincoln Center—performs on the piece, which he also introduces on camera: the premier of a new arrangement of Charlie Parker’s “Yardbird Suite.”

The concert, which brings viewers into the acclaimed artists’ homes and studios across the world, was aired to guests by invitation only on April 15, and was publicly posted to YouTube the following day. As of this writing, the video has amassed close to 100,000 views.

“Since it was all online and done from each artists' individual home, a lot of the nervousness that comes from performing alongside musicians of that caliber was to a lesser extent than if I was on stage,” Whitelock says. “However, that does not mean I took my role any less seriously than required, as I knew I would have to uphold the incredibly high standard of one of the greatest bands on the planet.”

Whitelock was invited to play by Marsalis himself, who he has known personally from a young age. Whitelock’s father is a nine-time Grammy award winning recording engineer, who has worked on dozens of projects with Marsalis through the years.

“I consider myself extremely fortunate to have the access to Mr. Marsalis and Jazz at Lincoln Center that I’ve been afforded, and I don’t take that for granted,” Whitelock says. “If anything, it has inspired me to practice hard and earn these privileges in some capacity.”

The Cranford, New Jersey native plans to devote his time toward breaking into the New York City jazz scene after graduation.