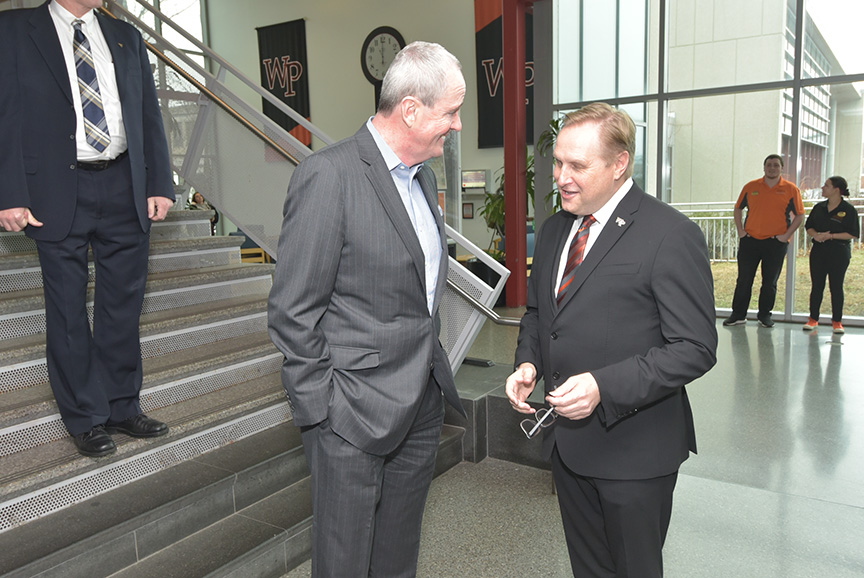 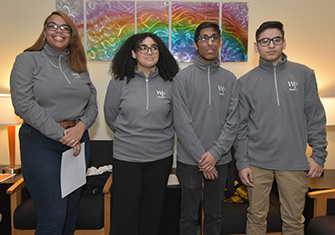 WP students who took part in the discussion, from left, are: Itatis Belen, Gladys Rivera, Hamzah Ahmad, and Fernando Mesa.

“The William Paterson community is grateful that Governor Murphy is committed – through both his words and his actions – to making our state’s public four-year colleges more affordable, so that money never stands in the way of talented, deserving students getting a degree,” said President Helldobler.

“Everyone at William Paterson shares that commitment. It is why I came here nearly two years ago,” he continued. “I wanted to serve the kind of student population that William Paterson enrolls in great numbers: first-generation students and low-income students; students from traditionally underrepresented and marginalized groups; students who have tremendous potential – who will help build a greater New Jersey and a better nation; students who just need a break to be able to enroll and remain enrolled right through graduation.”

The governor said he “could have gone to any institution of higher education” in the state to discuss affordability, but he chose William Paterson University because its Pledge 4 Success program caught his eye.

The four WP students – Itatis Belen, Hamzah Ahmad, Fernando Mesa, and Gladys Rivera – who took part in the roundtable currently receive financial support through the University’s newly instituted Pledge 4 Success program, which fills the gap between awarded aid and tuition and fees for first-year students with adjusted gross household incomes of $45,000 or less.

Now in its second semester, Pledge 4 Success has helped more than 200 first-year students on campus.

“Without Pledge 4 Success, I don’t know if I could support myself without incurring major amounts of financial debt,” Ahmad explained. A finance major, he added that he’s “so grateful to be at William Paterson” and hopes that additional students will be able to benefit from programs like Pledge 4 Success.

Likewise, Rivera said she’s always wanted to go to college but didn’t think she had enough money to do so. “Being able to have some financial support has really helped me … with people who can financially and emotionally support me, who believe in me, and give me that extra push,” she said of her WP experience, overall.

“We know that the baccalaureate degree is the great income equalizer,” President Helldobler said. “People who have one are more likely to own a home, raise a family, have access to health care, and recover more quickly from economic downturns. At William Paterson, we believe that, as we all work together to build a stronger and fairer New Jersey, education is not only a way up for our students, but also a way up for our great state.”

**Click here to see video coverage from the event.