Road to the Super Bowl: William Paterson University Professor Climbs the Ranks at the NFL 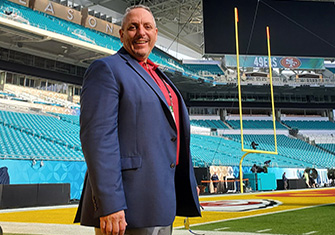 Professor Robb Rehberg on the field at Hard Rock Stadium

Like millions of people across the globe, William Paterson University Professor of Kinesiology Robb Rehberg watched the Super Bowl this month. But he watched it differently. He watched it like a hawk, from his assigned post atop the live action at Hard Rock Stadium in Miami, Florida.

An Athletic Trainer Certified spotter with the NFL, Rehberg was charged with spotting potential injuries to athletes on the field during the Big Game.

This past football season, his fourth working as a medical spotter with the NFL, Rehberg was appointed to a brand new position in the League – coordinator of Athletic Training Certified spotters. As such, in addition to his regular duties working as a spotter at New York Jets home games, Rehberg now travels the nation meeting with the medical spotters assigned to other cities’ home teams, serving as a sort of quality assurance liaison.

“I talk to the spotters to see what they think works best in the program and what doesn’t, finding ways to improve the spotter program in that specific city – be it through changes to facilities or equipment – and basically making sure that we’re doing the best we can for the players’ health and safety, in a consistent, uniform manner across the League,” Rehberg explains. “The players should expect and receive the same medical service whether they are playing home or away; that’s really our goal.”

Through his new position, Rehberg landed a coveted opportunity to work the Super Bowl.

“This was a pretty regular game. The only difference is that there were millions of people watching, and a much longer halftime with a concert,” Rehberg says with a laugh. He quickly turns serious again, though, when it comes to talking about the great responsibility his job carries. “We’re there for one reason, and that’s to protect the health and safety of the players, whether it’s a preseason game, regular season game, post-season contest, or the Super Bowl.

Working as an Athletic Trainer Certified spotter with the NFL, Rehberg says, has been a huge asset to his teaching at William Paterson.

“It has really allowed me to bring cutting-edge information about the athletic training discipline directly into the classroom. Working at the top level, for the National Football League – being able to do on Sunday afternoon what we do there – and then being able to come to the classroom on Monday to tell students what we do and how we do it has been great,” he explains.

His high-profile side job has also served as a way to further engage students with their course material.

“Some of the courses I teach on campus involve looking for the mechanisms of athletic injury, so it’s not unusual for students to ask if I watched a certain football game and what I thought about a certain play or injury,” the professor explains. “It draws them into what we’re trying to teach them to begin with: the biomechanics of various injuries.”