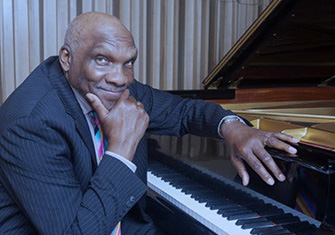 Tribute to the late Harold Mabern on Feb. 16

Grammy Award-winning pianist Bill Charlap, the director of jazz studies at William Paterson University in Wayne, and internationally renowned trumpeter Jon Faddis kick off the spring 2020 season of the University’s Jazz Room series with a duo performance on Sunday, February 9.

The series continues on February 16 with a tribute to the late iconic pianist Harold Mabern, who taught at William Paterson for 39 years. The William Paterson Jazz Ensemble will be joined by saxophonist-flutist Mitch Frohman on March 1, followed by William Paterson alumnus Brian McCarthy and his Nonet on March 8. Saxophonists Gary Smulyan and Ralph Moore bring their “Encounters” Quintet to the Shea Center stage on April 5.  The series concludes on April 26 with the 18-piece WP Jazz Orchestra and vibraphonist Steve Nelson.  All concerts are held at 4 p.m. in the Shea Center for Performing Arts on campus.

Pianist Bill Charlap and trumpeter Jon Faddis open the series on February 9. Charlap, who joined the William Paterson faculty as director of jazz studies in 2015, is a veteran of groups led by legendary saxophonists Phil Woods and Gerry Mulligan. His own trio of more than 20 years is one of the leading jazz groups. Faddis is equally prominent on the New York and national scene. He is known as a studio musician, lead trumpet with the Thad Jones-Mel Lewis Orchestra, and as leader of the Carnegie Hall Jazz Orchestra, the Chicago Jazz Orchestra, and since the 1970s as a major solo artist associated with the iconic Dizzy Gillespie.

The iconic pianist Harold Mabern, who died suddenly in September 2019, had a profound impact on William Paterson’s jazz program, where he taught for 39 years. On February 16, two of Mabern’s well-known William Paterson students, alumni Eric Alexander, saxophone, and Joe Farnsworth, drums, are joined by new faculty member Mike LeDonne on piano and a host of WP alumni and faculty in a tribute to the late piano master. The concert is a fundraiser for the newly established Harold Mabern Memorial Scholarship Fund at the University.

Saxophonist-flutist Mitch Frohman, who is well known for his 25 years with the iconic Tito Puente Orchestra, will be joined by the students of the high-energy William Paterson Latin Jazz Ensemble, under the leadership of faculty member Chico Mendoza, on March 1. Frohman, also known for his membership with the Mongo Santamaria Band, is leader or co-leader of the Bronx Horns, the Mambo Legends Orchestra, and the Eddie Torres Mambo Kings Dance Show Orchestra.

On March 8, William Paterson alumnus Brian McCarthy and his Nonet will take to the Shea Center stage to perform his nine-piece work, The Better Angels of Our Nature, which DownBeat magazine has called “a jazz album that makes a cavernous impression for its arresting beauty and conceptual brilliance.” The work, which takes its title directly from the final line of a speech by Abraham Lincoln, chronicles the years of reconciliation after the Civil War, which gave birth to, among many other things, the jazz art form. McCarthy’s project began with an arts grant in his home state of Vermont, and features a number of soloists who are alumni of William Paterson’s Jazz Studies Program.

Saxophonists Gary Smulyan and Ralphh Moore bring their “Encounters” Quintet to the Jazz Room on April 5. Smulyan, a member of Joe Lovano’s large group and a veteran of big bands led by Woody Herman and Thad Jones-Mel Lewis, has become the world’s leading baritone soloist. He won the Down Beat 2019 Readers Poll Baritone Saxophonist of the Year award, his 19th such award. Tenor saxophonist Moore, who is a veteran of groups led by Horace Silver, Roy Haynes, Dizzy Gillespie, is returning to the jazz scene after over a decade with Kevin Eubank’s NBC Tonight Show band. They will be joined pianist Renee Rosnes, bassist David Wong, and drummer Carl Allen.

The season concludes on April 26 with the 18-piece WP Jazz Orchestra, directed by David Demsey, professor of music and coordinator of jazz studies. They will be joined by the versatile vibraphonist Steve Nelson, a veteran of bassist Dave Holland’s acclaimed Quintet, and a longtime collaborator with the late Mulgrew Miller as a member of Miller’s Wingspan group. Nelson has also performed with Kenny Barron, David “Fathead” Newman, Johnny Griffin and Jackie McLean. Along with Nelson’s interpretations of jazz classics and standards, this concert will feature arrangements of Nelson’s compositions written especially for this concert by William Paterson master’s degree students.

William Paterson University’s Jazz Room series, now in its 43rd season, is the longest-running program of its kind in the United States. Launched in 1978, the Jazz Room has welcomed more than 500 jazz legends to the stage, including Sonny Rollins, Wynton Marsalis, Wayne Shorter, Joe Williams, Marian McPartland, Slide Hampton, Kenny Burrell, Joe Lovano, Kenny Garrett, Clark Terry, Michael and Randy Brecker, the Vanguard Orchestra, and more. Concerts have encompassed the entire spectrum of jazz, from early jazz and swing to avant garde, and from intimate solo performances to big bands. The performance series provides support for the University’s internationally renowned Jazz Studies Program, founded in 1973, which draws students from across the United States and abroad under the current direction of pianist Bill Charlap.

All performances take place in the Shea Center for Performing Arts on campus at 4 p.m. The concerts are preceded by “Sittin’ In,” informal jazz talks with the afternoon’s artists, at 3 p.m. in Shea Center 101, which are free to all Jazz Room ticketholders. Sunday afternoon concerts begin with a performance by a William Paterson student jazz ensemble.

The Jazz Room at William Paterson University has been made possible, in part, by funds from the New Jersey State Council on the Arts, a partner agency of the National Endowment for the Arts.