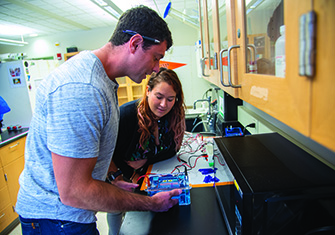 Professor James T. Arnone and Christie Dix '20 work together in the lab

What started as a student assignment in a biotechnology course on campus will turn into a cross-country research collaboration next year, if biology professor James T. Arnone gets his wish.

Arnone, whose research is hinged on genetics and the biology of aging, has been charging each student in the undergraduate and graduate levels of his Recombinant DNA Technologies course over the past three years to propose a genetic mutation, and then enact that mutation on budding yeast, to slow down the aging process. The genetics and biological aging processes of budding yeast, Arnone explains, translates to those of humans.

He and his students are specifically trying to slow down the aging process, and therefore increase the lifespan, which has potential applications for people diagnosed with diseases like progeria – a rare genetic condition that causes a person to age prematurely. People with progeria live an average of 18 years. Student-researchers working with Arnone utilize strains of yeast that live one to two weeks, compared to that organism’s normal six- to eight-week lifespan.

“There are still so many fundamental questions about aging that remain unresolved, including contradictory findings on this topic, and there are so many factors that play into it on the genetic level,” Arnone explains of his reason to pursue this type of research.

He is in the process of writing an article for publication, with a few former students as co-authors, about the methodology for this research project in the hopes that others across the country will join as partners. More people equates to more ideas and therefore a better chance of great findings in the lab, Arnone explains.

“Our students have been really enthusiastic, and they are quite creative when it comes to gene cloning,” he says, as he flips through student project proposals laden with various graphs and DNA sequences. “It’s nice to see how other people think about these problems.”

Undergraduate biology major Christie Dix ‘20 is one of those people. She is currently performing research in Arnone’s lab, and hopes her work will “make a real difference” someday.

“Essentially, I created a new ring of DNA that has a lifespan-extending gene of interest on it so that I can study its overexpression in different strains of yeast,” Dix explains. “Some of these yeast strains have been engineered so that a certain gene no longer works correctly, leading to a shortened lifespan. When the new ring of DNA with my particular gene on it is inserted into the yeast cells, sometimes it can help the yeast live longer again … Searching for these interactions can help lead to a better understanding of aging.”

Arnone says the work performed in genetics labs can’t eliminate aging entirely, but that some measure of scientific intervention could create a significantly better quality of life for people facing issues related to aging – one day potentially increasing the lifespan and health-span for people who suffer from progeria, or possibly Alzheimer’s.

“There’s a myth that’s it’s simple: that there’s one thing you can do to live longer, such as drink red wine, but it’s a fascinatingly complex interaction of so many biological, biochemical, molecular, and genetic processes that influence aging,” Arnone says.