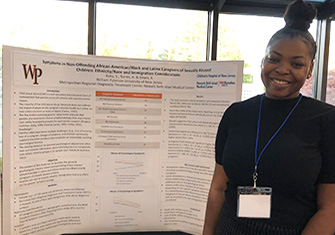 Sekinat Kuku, who is pursuing her doctorate in clinical psychology at William Paterson University, has won this year’s New Jersey Psychological Association Graduate Student Research Award. Kuku has been performing research, under the mentorship of professor Aileen Torres, on the psychological symptoms in Black and Latinx parents or caregivers who find out their children have been sexually abused.

“These parents or caregivers, they have gone through a terrible event that will scar them for the rest of their lives. What Dr. Torres and I found out in researching is that psychologists don’t really look at the parents after some time has passed from the initial trauma. What are the lasting clinical symptoms that they’re going through?” Kuku asks.

She has honed in on Black and Latinx caregivers, she says, because there is little psychological research on those groups overall, and mental health services should be culturally-sensitive.

“I am thankful and grateful for the NJPA award because it acknowledges the vitality of this work,” Kuku says.

Torres has been leading group therapy sessions for caregivers from both populations as a way of better understanding their needs.

“We found that in the LatinX communities, for example, the caregivers rank particularly high in areas of interpersonal sensitivity,” Kuku explains. “There is a heightened awareness and worry of what others think of them, and what the abuse has done and could do to their future relationships.”

Many of those LatinX caregivers had actually suffered abuse themselves, but wouldn’t admit such until later therapy sessions, out of fear of how they would be perceived by the group, Kuku adds.

In Black caregivers who’ve had children suffer sexual abuse at the hands of another, Torres and Kuku have found a higher incidence of dysfunctional sexual behavior as a result of their traumatic past experiences.

Such knowledge, she says, can and should inform clinical treatment. “We need to tailor our interventions to meet the patients where they are.”

Kuku and Torres have co-authored a scholarly article on this research which they hope to have published in the coming months.