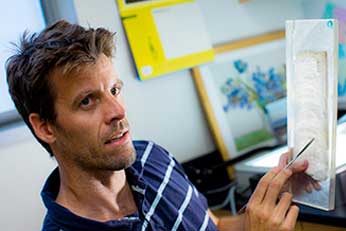 Researchers studying trace-element records from stalagmites in caves in China, combined with climate modeling experiments, have demonstrated the important role that shifts in the jet stream have on the East Asian summer monsoon rains across China. The study, conducted by a team of scientists, including Michael Griffiths, associate professor of environmental science at William Paterson University, appears in the November 2, 2018 issue of Science.

“Oxygen isotope analysis—i.e., the ratio of heavy O-18 to light O-16—of stalagmites collected from caves in China has provided us with an important record of monsoon circulation going back more than 600,000 years. But those records do not completely explain local rainfall variation,” says Griffiths, a geochemist and paleoclimatologist. “Through measurements of trace elemental impurities of magnesium and strontium preserved in these cave records, combined with climate model simulations, we show that during the end of the last ice age (10 to 20 thousand years ago), abrupt shifts in the jet stream had adverse effects on the distribution of rainfall across China.”

Specifically, Griffiths says, a northward move in the jet stream could play a significant role in whether areas of China experience droughts or floods, especially vulnerable areas along the Yangtze River that are critical to Chinese agriculture. Griffiths explains, “Improving our understanding of the factors that influence the monsoon climate is so important to this region.”

A “Perspective” article accompanying the research study is available at:
http://science.sciencemag.org/content/362/6414/518.summary