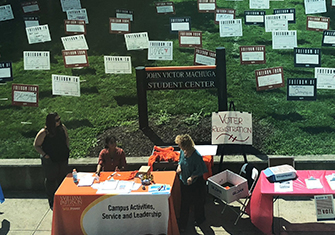 William Paterson University received a gold seal for achieving a student voting rate between 40 percent and 49 percent in the 2018 midterm election at the 2019 ALL IN Challenge Awards Ceremony held by the ALL IN Campus Democracy Challenge, a group committed to increasing college student voting rates.

“William Paterson University is honored to receive this national recognition, and very excited that our efforts were productive in increasing student voter registrations and actual voting,” says H. Mark Ellis, professor of sociology and director of the American Democracy Project. “Our faculty, staff, administrators and students have made extraordinary efforts to increase civic engagement and voter turnout throughout the year.”

Student participation in elections has increased from the 2014 midterm election to the recent 2018 midterm election. According to the National Study of Learning, Voting, and Engagement, voter turnout at more than 1,000 institutions participating in the study increased by 21 points from 19 percent to 40 percent. At William Paterson, the voting rate of students increased 25.5 percentage points, from 14.8 percent in 2014 to 40.3 percent in 2018.

During the 2018-2019 academic year, William Paterson participated in the NJ Ballot Bowl, a statewide voter registration competition led by and for students, as well as numerous voter registration drive events held on campus as part of Club Fair, Greek Fair, Latinx Rock the Vote, and the University Galleries’ “For Freedoms Project.”

The ALL IN Campus Democracy Challenge is a nonpartisan, national initiative recognizing and supporting campuses as they work to increase engagement and full student voter participation. More than 560 campuses, enrolling more than 6.2 million students, have been part of the ALL IN Challenge since its launch in summer 2016.