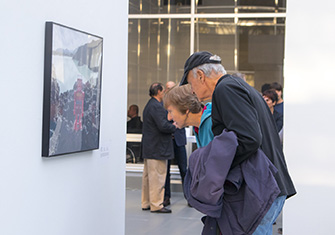 A selection of recent artworks created by 22 members of the art faculty at William Paterson University in Wayne will be featured in an exhibition at the University Galleries in the Ben Shahn Center for the Visual Arts from October 30 through December 11, 2019. Gallery hours are Monday through Friday from 10 a.m. to 5 p.m., and on Saturdays (November 16 and December 7) and Sundays (November 24) from 10 a.m. to 1 p.m. Admission is free. A faculty panel discussion is scheduled for Monday, November 4 from 11 a.m. to 12:30 p.m. An opening reception will follow from 12:30 to 2 p.m.

On view in the Court Gallery, this exhibition features work by faculty who teach ceramics, drawing, graphic design, sculpture, painting, photography, and printmaking. The more than 30 works in the exhibit reveal the faculty’s unique artistic practices as they innovate across diverse media.

This year’s exhibit features an oil on canvas painting titled Latch (2019) by new full-time faculty member Grace Ramsey. Ramsey is a painter whose artwork addresses themes of fantasy, womanhood, and memory. She explains, “I explore themes of girlhood and womanhood using elements of ritual, magic, and religious iconography to give color and light to what is kept hidden or left unsaid.” Ramsey received her MFA from Tulane University and has been awarded several grants including the Joan Mitchell Foundation MFA Grant (2012) and the Joan Mitchell Foundation Career Opportunity Grant (2014). Her work has been shown in several museums and galleries in the southern United States. She has published works in the Oxford American, Artvoices, Arkansas Life, The Idle Class, and Momma Tried.

Also on view are three ceramic sculptures by Elaine Lorenz, who teaches sculpture with a focus on ceramics. Recently, her large-scale sculpture, Élan Vital, was purchased by a private collector and donated to the Village of Piermont, New York. Now publicly displayed on the north side of the Piermont Pier overlooking the Tappan Zee and the New Bridge, this sculpture highlights her inspiration from life’s beginnings as well as the subtle elements of the landscape. Born in the Bronx, Lorenz spent her childhood summers in the Berkshire Mountains and currently lives in Hawthorne.

Multimedia artist Ashley Gerst presents her award-winning animated short film, Spirit Seam. Set in a small coal mining town in Appalachia in 1952, the film relates a beautiful and somber story about the unfortunate aspect of our mortality. Drawing on her animation expertise, it includes a combination of 3D animated characters, 2D animated effects, and physically constructed sets. The film has been featured in numerous film festivals and received best animation awards from the Mosaic Film Festival (Clarkston, Georgia), Cine Fern Online, and the South Film and Arts Academy Festival, among others. The concept art and set construction have been featured in Professional Artists Magazine’s December 2017/January 2018 issue. Originally from Ohio, Gerst currently resides in Brooklyn.

Leslie Nobler showcases textiles about climate change and U.S. politics along with a related artist book. She recently participated in the exhibition Inspired by Quilts on view at the Studio Montclair Gallery through October 19, 2019. Her works in this exhibit were inspired by the Montclair History Center’s collection of 19th and early 20th century quilts. Nobler has exhibited her work internationally and lives in Little Falls.

Gianluca Bianchino exhibits works from his “Transportals” series, which incorporate wood, lenses, and found objects. Exhibit visitors are encouraged to peer into his lenses to view unusual sculptural forms that evoke space junk or geological specimens. Earlier this year, Bianchino had a solo exhibition, Uncharted Space, featuring a site-specific installation at New Jersey City University’s Gallery where he received his BFA before receiving his MFA from Montclair State University. Bianchino is a long-time resident of northern New Jersey and maintains a studio in Newark.

The exhibition is one of three on view concurrently in the University Galleries. The South Gallery presents The World Through My Eyes: Celebrating the Legacy of Ben Shahn, and the East Gallery showcases Visiones Latinx: Selections from the Permanent Collection.