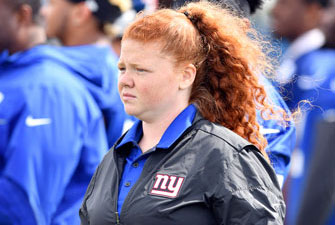 Bailey Wyrostek observes from the sidelines during Giants training camp

Amid wrapping up her junior year and enjoying summer break, William Paterson University athletic training major Bailey Wyrostek ‘20 lived out a dream she’s had since her very first day on campus.

She spent two months interning with the New York Giants professional football team, during the team’s training mini camps at the MetLife Sports Complex, in East Rutherford, New Jersey. She shadowed the team’s certified and licensed athletic trainers, who provide hands-on care to athletes during training and competition – helping to prevent, diagnose, treat, and rehabilitate both acute and chronic injuries. She even got to perform some stretches, massages, and modalities on the Giants players herself.

WP’s athletic training education program has a written affiliation agreement with the New York Giants dating back 21 years, wherein the University commits to send two top-notch interns to the team annually – one for its competition season and one for training camp.

Securing one of these internships, Wyrostek says, was her goal since Day One at William Paterson University – before she even took a class on campus. She learned about the University’s affiliation with the Giants during an open house presentation from professor Dr. Robb Rehberg, who works as an athletic trainer certified (ATC) spotter for the NFL.

“I turned to my mom and said, ‘I want to do that.’” It wasn’t even because it was the New York Giants, I’m not much of a football fan, it was because I knew that it was going to be an experience that I couldn’t get anywhere else. It’s basically the best of the best,” Wyrostek says. “I knew that with this internship, it was going to show me different areas of the profession that I might not see in a college or high school sports setting.”

And for one WP student, a door opened right back to the NFL.

Justin Bland ’02 interned with the Giants through the University’s affiliation and later went on to become associate athletic trainer for the NFL’s Jacksonville Jaguars, a post he’s held since 2008. In 2015, he was named Professional Athletic Trainer of the Year by the Southeast Athletic Trainers Association (SEATA).

Wyrostek heads into her senior year invigorated by her experience with the Giants, and Gazzillo Diaz looks forward to additional WP students getting to feel the same way through WP’s partnership with the team. Additional athletic training students will be afforded a similar opportunity this year through the University’s newly-signed internship agreement with local professional soccer team, New York City Football Club.

“Each day that I had with New York Giants medical staff, I tried my best to ask as many questions as possible and pick their brains about different topics to widen my knowledge, so that one day, I can get myself to the position that they are in,” Wyrostek says. “I have always loved athletic training, it was something I knew I wanted to do since high school, but this internship was able to confirm for me that this is exactly what I want my future to be.”