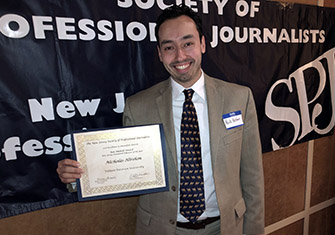 The judges cited Hirshon for founding and advising a Society of Professional Journalists chapter on the William Paterson campus; organizing a walking tour of historic journalism sites in Philadelphia with his students during a regional SPJ conference last year; organizing and hosting a monthly series of discussions for students with professional journalists; and demonstrating “tireless work" to host the inaugural inductions for the New Jersey Journalism Hall of Fame event held at William Paterson in April 2019.

Hirshon is the author of We Want Fish Sticks: The Bizarre and Infamous Rebranding of the New York Islanders, a book published by the University of Nebraska Press in December 2018. He serves as the digital-media review editor for the academic journal, American Journalism. Previously, he was a reporter at the New York Daily News from 2005 to 2011, covering breaking and community news.