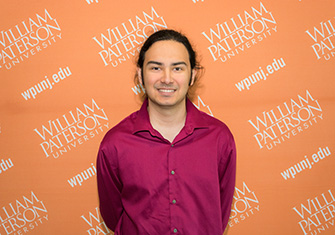 Kevin McKiernan, of Morris Plains, New Jersey, has been named valedictorian of William Paterson University’s Class of 2019. McKiernan successfully completed the requirements for two majors (Asian studies and history) and two minors (linguistics and French) in less than four years, notching a perfect 4.0 grade point average in the process.

Having found his own path to academic strength at WP, McKiernan spent much time on campus helping other students finds theirs. He served as a supplemental instructor for the University’s course in Understanding Human Language, as well as a tutor of Japanese, history, and writing and grammar for the Academic Success Center.

“I’ve taught up to 10 people at one time in the Academic Success Center,” McKiernan says. “It’s an incredible place to see all the different stripes of William Paterson University, and I think it’s given me a really good grounding for where to go from here.

“Eventually I hope to work at a big research university where I can research to my heart’s content and teach,” he says. “I really hope to do both.”

In terms of research, McKiernan got plenty of practice at WP. He presented his work in language and linguistics at Explorations: Research, Scholarship and Creative Expression – the University’s annual celebration of faculty and student scholarly activity – for four consecutive years. His main research interest, and one he hopes to flesh out in graduate school, is the connection between Japanese, French and Brazilian cinema of the 1960s.

McKiernan is headed to the University of Minnesota to pursue a PhD in Asian literatures, cultures, and media.

As excited as he is for the future, the valedictorian says he will miss how close-knit a community William Paterson is. “Unlike some of the larger universities, where there are 200 people per class, I was in classes with maybe 20 people max. The professors here know your name. I was able to speak with them personally and hone in on topics I really liked, which both inspired me and helped me figure out what I want to do.”

WP’s campus diversity is also near and dear to McKiernan’s heart. “You can turn one corner and hear people speaking one language, which is their native language, and then turn another corner and hear another language,” McKiernan says, “Being on this campus reminds me of being in New York City with how diverse it is. It really is one of the bigger draws at William Paterson.”